Amnesty International says it has gathered "gruesome evidence" of ethnic cleansing by Islamic State jihadists in Iraq in its campaign to obliterate all traces of non-Arabs and non-Sunni Muslims.

The United Nations is to investigate reports of targeted killings, forced conversions, abductions, slavery, sexual abuse, and the besieging of entire communities.

In a report published today, the rights group said IS jihadists committed "war crimes, including mass summary killings and abductions".

"The massacres and abductions being carried out by the Islamic State provide harrowing new evidence that a wave of ethnic cleansing against minorities is sweeping across northern Iraq," said Donatella Rovera, Amnesty's Senior Crisis Response Adviser currently in northern Iraq.

The Sunni radical IS has pressed a campaign of terror in areas under its control in Syria and Iraq, which it has declared an Islamic "caliphate," carrying out decapitations, crucifixions and public stonings.

In June, the group launched a lightning offensive in Iraq, overrunning parts of five provinces and targeting minorities there including Yazidis on Mount Sinjar, Shia Turkmen and Christians.

"The Islamic State is carrying out despicable crimes and has transformed rural areas of Sinjar into blood-soaked killing fields in its brutal campaign to obliterate all trace of non-Arabs and non-Sunni Muslims."

The watchdog said two of the "deadliest" incidents took place in the Yazidi villages of Qiniyeh and Kocho on 3 August and 15 August respectively.

"The number of those killed in these villages alone runs into the hundreds," it said.

Entire communities wiped off the map of #Iraq IS transformed rural areas of Sinjar into blood-soaked killing fields http://t.co/UmqgznM3fG

Survivors said jihadists rounded up men and boys, bundled them into vehicles and drove them away "to be massacred in groups or shot individually".

A survivor from the Kocho killings said jihadists "just filled up vehicles indiscriminately".

Amnesty also related the fate of brothers Saeed and Khaled who had lost seven brothers in the massacre.

"Saeed... was shot five times, three times in his left knee and once in the hip and shoulder," it said.

Salem, another survivor, told Amnesty how he hid near a massacre site for 12 days before being able to flee, while other villagers lay helpless.

"Some could not move and could not save themselves, they lay there in agony waiting to die. They died a horrible death. I managed to drag myself away and was saved by a Muslim neighbour," he said.

Amnesty reported mass abductions of women and children, saying "hundreds, possibly thousands" of Yazidis were seized by IS jihadists along with scores of men.

"The mass killings and abductions have succeeded in terrorising the entire population in northern Iraq, leading thousands to flee in fear for their lives," said the watchdog.

In some cases entire families were abducted, it said, adding that one family provided Amnesty with a list of 45 missing relatives.

Ms Rovera urged Iraqi authorities to track down and bring to justice "those ordering, carrying out or assisting in these war crimes". 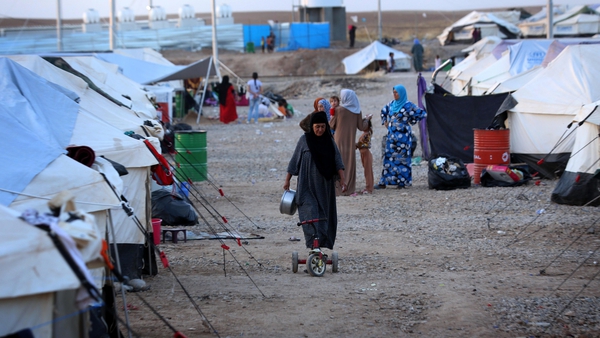