The Minister for Agriculture and Defence has said Ireland has made it very clear that the mandate for the mission on the Golan Heights does match the situation on ground.

Minister Simon Coveney told RTÉ Six One News that it is no longer an observation mission in a demilitarised zone but a war zone and the circumstances have changed.

He said Ireland has made it very clear that if the UN wants Ireland to continue supporting this mission there must be a full review and assurances given as to how the mission can adapt or how the mandate can change to adapt to the new realities.

Mr Coveney said it is not acceptable, and he believes other countries will have a similar view, that troops are being asked to operate a mandate which does not reflect the reality of the risks and dangers involved.

He said that, clearly, changes are needed and the status quo is no longer acceptable.

The Minister said he wished to stress that Ireland is still committed to this mission but it is insisting on a full review so that it can send troops to a peacekeeping mission with an acceptable level of risk.

Mr Coveney added the past three days has seen a lot of risk and instability in the Golan Heights, with Fijian peacekeepers who were captured still being held.

He said the UN is managing negotiations to try to secure their safe release.

Irish troops are on standby in their headquarters in case they are needed to bring these troops back on the basis of an agreement.

The Minister also said there are 130 Irish troops among the 1,200 UN troops deployed and they are the best armed.

Earlier, the Taoiseach said he does not want to see a situation where Irish troops are put in a position of undue risk on the Golan Heights.

Separately, Minister for Foreign Affairs and Trade Charlie Flanagan said there was a review under way regarding the situation for Irish troops in Syria.

He said the safety of Irish troops was a priority and that the Irish troops there were very well-equipped and highly trained.

Minister Flanagan said he expected Mr Coveney would brief Cabinet on the matter on Wednesday.

Heavy fighting between Syrian army forces and rebels broke out on the Golan Heights this morning, but it is unclear if either of the two sides had gained an advantage to control a key frontier crossing.

Rebels of al Qaeda-linked Nusra Front have been battling the Syrian army in the area and have wrested control of the crossing at Quneitra, which is operated by the United Nations.

Persistent small arms fire and explosions from mortar shells and other munitions could be heard on the Israeli-controlled side of the frontier of the strategic plateau, a photographer reported.

At least one tank belonging to the Syrian army loyal to President Bashar al-Assad was also involved and rebels could be seen a few metres away from the frontier fence.

Yesterday, Israel's military said it shot down a drone that flew from Syria into Israeli-controlled airspace over the Golan.

It was not immediately clear who dispatched the unmanned aircraft or the nature of its mission in an area where fighting from Syria's civil war has occasionally spilled over into Israeli-held territory.

In a statement, the military said the drone was downed by a Patriot missile near the Quneitra crossing between the Israeli-held Golan Heights and Syria.

A contingent of 44 UN peacekeepers from Fiji was detained on the Syrian side of the Golan by Islamist militants on Thursday, and the head of the Fijian army said yesterday negotiations for their release were being pursued.

More than 70 Philippine troops trapped by Islamists in a different area on the Syrian side of the frontier were extracted to safety, the United Nations and authorities in Manila said.

Israel captured the Golan Heights in the 1967 Middle East war. 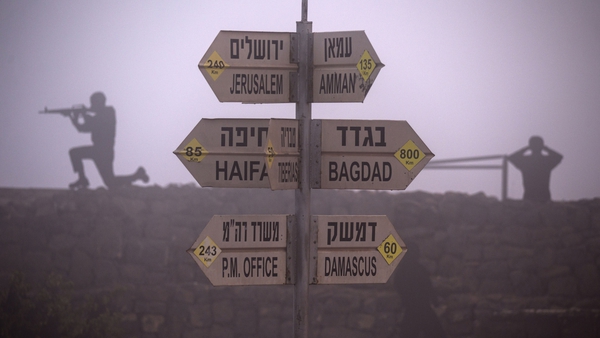 Irish soldiers in Golan Heights safe and accounted for