The test results of a suspected Ebola virus case in Donegal are expected tomorrow evening.

In a statement, the HSE said its "public health department was made aware earlier today of the remains of an individual, discovered early this morning, who had recently travelled to the one of the areas in Africa affected by the current Ebola outbreak."

The man, who was in his 40s and originally from the Mountcharles area near Donegal town, was found dead early this morning.

He was from a well-known family and was unmarried.

His body was brought to Letterkenny General Hospital by an undertaker following his sudden death.

The dead man was thought to have been living in Dublin and had been working in Sierra Leone some weeks ago for a communications firm.

He had reportedly been receiving treatment for malaria but not as an admitted patient to any health facility.

He was visiting relatives in Donegal when he became ill.

The HSE said it had been in contact with some of the man's family members.

It also said precautionary infection control procedures have been put in place in the community and at the mortuary.

If the case is confirmed tomorrow, then an established Government Task Force is expected to meet to discuss the situation.

The HSE statement added: "The appropriate national guidelines, in line with international best practice, are being followed by the public health team dealing with the situation.

"This means that the body of the deceased has been isolated to minimise the potential spread of any possible virus. Blood samples have been sent for laboratory testing to confirm whether or not this individual had contracted the Ebola disease.

"Until a diagnosis is confirmed, and as a precautionary measure, the individual's remains will stay in the mortuary pending the laboratory results which are expected late tomorrow.

"The risk of transmission of any disease is considered to be extremely low but as a precautionary measure, appropriate infection control procedures are being put in place in the community and at the mortuary pending the outcome of laboratory tests," the statement said.

Dr Darina O'Flanagan, Head of the HSE Health Protection Surveillance Centre, said: "In general, the risk of contracting Ebola virus disease is extremely low and would involve very close personal contact with the infected individual or their body fluids for there to be any risk at all."

"We await the outcome of the laboratory tests before we will know whether or not this individual had contracted Ebola virus disease. The appropriate public health guidelines are being followed at every stage in this process as a precaution."

Two US patients receiving treatment for the deadly Ebola virus have been discharged from Emory University Hospital in Atlanta.

Kent Brantly, a doctor who fell ill with the virus while working in Liberia, has recovered and was discharged from hospital today.

Speaking at a news conference Mr Brantly said he was “forever thankful to God” for sparing his life.

The president of the Christian missionary group for which Dr Brantly worked in Liberia, Samaritan's Purse, hailed his "courageous spirit" as he battled the virus that has killed 1,350 people in west Africa since March.

Aid worker Nancy Writebol has also been discharged from the same hospital where she was receiving treatment for Ebola.

Ms Writebol has tested clear of the virus and is said to be with her husband at an undisclosed location.

A health ministry statement declared "a total travel ban for all non-citizens travelling from these high risk countries," referring to Guinea, Liberia and Sierra Leone.

South Africans returning home from these areas will undergo strict screening, it added.

South Africa has so far been Ebola-free despite two scares in as many weeks: a South African man returning from Liberia and a Guinean woman.

Johannesburg is a major hub for air travel between southern Africa and the rest of the continent. 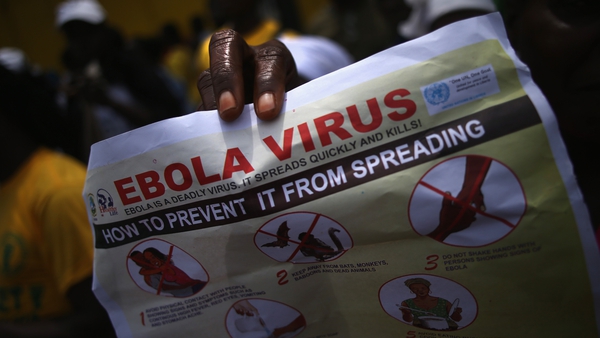