"I can confirm that at 2:15pm (12.15pm Irish time) the Ukrainian side began border-customs formalities relating to the Russian humanitarian cargo," a border guard spokesman told Reuters.

It is not clear when the trucks will be authorised to leave the rebel-held boarder and enter Ukrainian territory.

Meanwhile, Ukrainian president Petro Poroshenko may announce the end of parliament as early as Sunday, following the collapse of the governing coalition.

The decision will be taken where there is a constitutional basis for it, his spokesman, Svyatoslav Tseholko, said in a Twitter post.

Ukraine's governing coalition collapsed on 24 July launching a 30-day period in which parliament needs to approve a new coalition or face dissolution.

Parliamentary elections are likely to run in late October.

President Poroshenko is to attend a meeting with leaders of the European Union and Russia next week in Minsk.

On the presidential website Mr Poroshenko said the meeting will focus on the withdrawal of rebel fighters from Ukraine.

The meeting is a step towards defusing the conflict in Ukraine, the speaker of the Russian parliament was quoted as saying earlier today.

The leaders of Belarus and Kazakhstan, who are part of the Russia-led Customs Union, will also be present at the 26 August meeting in the Belarus capital.

The forces of the Western-backed Kiev government are steadily gaining the upper hand over the separatists in Russian-speaking eastern Ukraine and are tightening the noose around the main rebel bastions of Donetsk and Luhansk.

Reuters reporters in Donetsk said mortar bombs had struck Chelyuskintsev Street in the north of the city, a few kilometres from the frontline of the conflict, shattering the windows of several five-storey apartment buildings and shearing off the branches of trees and downing power lines.

The attack left large craters in the street and a metre-wide hole in the first floor of one of the apartment buildings.

The Donetsk city administration, controlled by the separatists, said nine residents had been killed in shelling on Wednesday.

The Ukrainian government denies that its forces are targeting civilian areas.

The government in Kiev and its allies have accused Moscow of orchestrating the separatist rebellion and equipping the rebels with tanks, missiles and other heavy weaponry.

Moscow denies this and accuses Kiev of waging a war against its own people and shelling civilians.

The conflict has plunged relations between Russia and the West to their worst level since the end of the Cold War in 1991.

The United Nations puts the death toll in the conflict at 2,086, including civilians and combatants. That figure has nearly doubled since late July, when Ukrainian forces stepped up their offensive and the fighting spread to major urban areas. 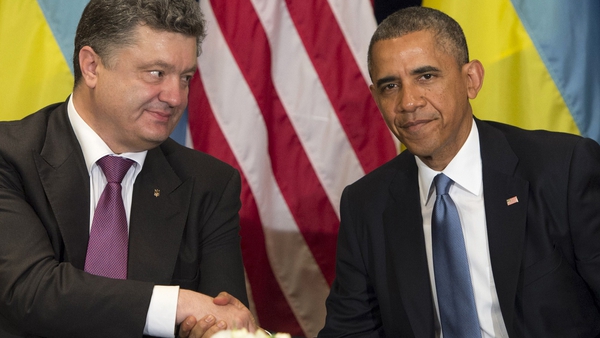