Ukrainian President Petro Poroshenko is to take part in talks with Russian President Vladimir Putin and several EU officials on the conflict in eastern Ukraine and energy security.

The meeting is to take place in Minsk on 26 August and will be attended by the European Union's foreign policy chief Catherine Ashton.

A statement on Mr Poroshenko’s website said the meeting will address "the implementation of the Association Agreement between Ukraine and the EU and the stabilising of the situation in the Donbass."

Presidential aide Valeriy Chaly said a Ukrainian delegation is being organised for the talks.

"Today a clear diplomatic roadmap is taking shape. We can come up with new approaches that will allow us to talk about a move from war to peace," Mr Chaly said.

Ukraine's military has said street battles with pro-Russian rebels have moved into centre of the city of Luhansk, which is close to the border with Russia.

Operations to recover more bodies from the site of a rocket strike on a refugee convoy of buses and cars near the city yesterday have been suspended.

Seventeen bodies have so far been recovered.

The attack occurred in an area where there had been intense artillery exchanges between government forces and pro-Russian separatists.

The Kiev military blamed the attack on the rebels, but they have denied responsibility.

At least one rebel leader suggested no attack had occurred.

The military said yesterday that many of those killed, who included women and children, had been burned beyond recognition.

Many bodies had been blown apart by the blast.

The US State Department condemned the attack on the convoy, which was near an area of heavy fighting between Khryashchuvatye and Novosvitlivka, but said it could not confirm who was responsible.

"We strongly condemn the shelling and rocketing of a convoy that was bearing internally displaced persons in Luhansk ...Sadly, they were trying to get away from the fighting and instead became victims of it," State Department spokeswoman Marie Harf told a news briefing in Washington.

Ukrainian government forces have been fighting separatists for four months in the Russian-speaking east of Ukraine.

The rebels have set up 'people's republics' and say they want to join Russia.

Ukraine says Russia, which seized the Crimean peninsula in March after a pro-Western government took power in Kiev, has orchestrated the uprisings and is arming the rebels with tanks, missiles and other heavy weaponry.

The Kremlin denies this. 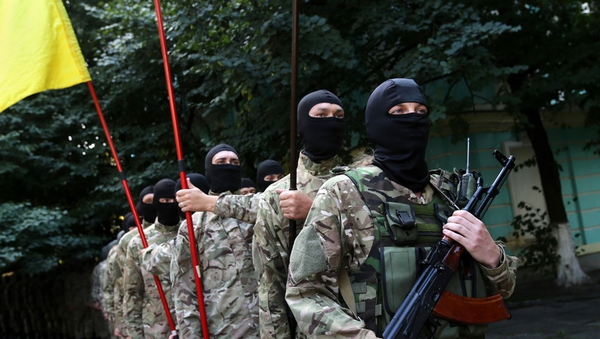 Refugees killed in strike on convoy in Ukraine