Ukrainian forces have raised their national flag over a police station in the city of Luhansk.

The city has been under rebel control for months.

Ukrainian officials said however the rebels were fighting a desperate rearguard action to hold on to Luhansk.

Luhansk is their supply route into neighbouring Russia and the flow of weapons and fighters from Russia had accelerated.

The foreign ministers of Ukraine, Russia, France and Germany were meeting in Berlin.

German Foreign Minister Frank-Walter Steinmeier said talks would focus on how to achieve a ceasefire and prevent weapons and fighters crossing into eastern Ukraine.

Russia denies helping the rebels and accuses Kiev, backed by the West, of triggering a humanitarian crisis.

Kiev is being accused of using indiscriminate force against Russian speakers in eastern Ukraine who reject the Ukrainian government's rule.

Separatist officials in Luhansk could not be reached by telephone, and a separatist spokeswoman in Donetsk, the other rebel strong-hold, said she had no information about Luhansk.

A photograph posted on Twitter appeared to show a Ukrainian flag on the front of the police station, but it could not be independently verified.

If confirmed, the taking of the police station is significant because Luhansk has for several months been a rebel redoubt where Kiev's writ has not run.

He said his forces had recaptured a railway junction at Yasynuvata, north of Donetsk, which he said had "strategic significance".

Fighting in and around Donetsk has led the main city in eastern Ukraine to cut the water supply.

Local authorities have urged residents to store up drinking water before shutting off the tap.

Donetsk city council has said in a statement that it was forced to shut down its main water facility.

Donetsk has a population of one million people before the clashes between Ukrainian troops and pro-Russian insurgents holed up there gripped its neighbourhoods.

Russian and Ukrainian border guards have agreed to proceed with the inspection of a first group of trucks from Russia's humanitarian convoy for Ukraine, the International Committee of the Red Cross (ICRC) has said.

The convoy is due to travel from Russia into Ukraine under the aegis of the Red Cross.

ICRC also said it was still waiting to receive security guarantees from the fighting parties in eastern Ukraine before it goes ahead with the convoy.

Days of wrangling between Kiev and Moscow over the convoy have left the roughly 300 trucks parked up near the border since Thursday. 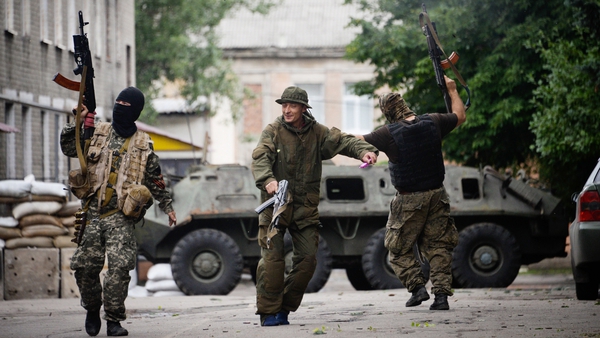