Climate change remains the most serious threat to the Great Barrier Reef and the outlook for the natural wonder is "poor", an Australian government report has warned.

The World Heritage site on the northeast coast is "under pressure" and its capacity to recover could be weakening, said the report from the Great Barrier Marine Park Authority, released late last night.

"Climate change remains the most serious threat to the Great Barrier Reef," the report said.

"It is already affecting the reef and is likely to have far-reaching consequences in the decades to come."

The marine park authority said that despite actions taken to protect the area since its last report in 2009, "the greatest risks to the Great Barrier Reef have not changed".

"Climate change, poor water quality from land-based run-off, impacts from coastal development, and some remaining impacts of fishing remain the major threats to the future vitality of the Great Barrier Reef," it noted.

"The overall outlook for the Great Barrier Reef is poor.

"Greater reductions of all threats at all levels, reef-wide, regional and local, are required to prevent the projected declines in the Great Barrier Reef and to improve its capacity to recover."

The report, which included contributions from the Australian and Queensland state governments, came two months after UNESCO deferred listing the reef as in danger.

The UN cultural body gave Australia until 1 February next year to submit a report on what it was doing to protect the biodiverse site.

While key habitats, species and ecosystems in the central and southern inshore areas of the reef continue to deteriorate, its northern third has good water quality and its ecosystem is in good condition, the marine authority's report said.

The number of dugongs, a long-living but slow-breeding mammal, continues to decline from very low levels, but the populations of other species such as humpback whales, estuarine crocodiles and loggerhead turtles are growing.

Environment Minister Greg Hunt said he is confident his government will be able to do enough to stop the reef from being listed as in danger, such as reducing port developments.

"The report is a mixture of pressure and progress," he told the Australian Broadcasting Corporation.

"In the south, there were some real negatives, to be honest. Now is the moment that we have to turn around the reef."

The World Wildlife Fund said "billions not millions" of dollars need to be invested in the reef to reduce pollution and repair degraded ecosystems.

"One concrete step governments can take to reduce pressure on the reef is to prohibit dumping of dredge spoil in the World Heritage Area," WWF's Australian head Dermot O'Gorman said in a statement.

Conservationists have criticised the approval of a major coal port expansion at Abbot Point, on the Great Barrier Reef coast, that requires the dredging of three million cubic metres of material from the seabed so freighters can dock. 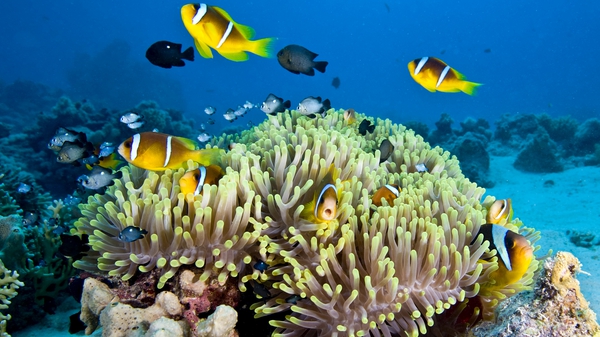