Russia has said suggestions it could use a humanitarian aid convoy to Ukraine as a cover for invasion were absurd.

Its Foreign Ministry criticised Australia for voicing such fears.

"They continue to voice the absurd claim that the humanitarian convoy to help the civilian population of southeast Ukraine could be used as a pretext for Russian 'military intervention'," it said in a statement.

A convoy of nearly 300 trucks carrying what Russia says is humanitarian aid for victims of fighting in eastern Ukraine is moving slowly towards the border.

There are concerns from the West over the shipment and Ukraine again insisted it would not allow the convoy on its territory.

"No humanitarian convoy of [Russian President Vladimir] Putin's will be allowed to cross the territory of the Kharkiv region," Ukraine's Interior Minister Arsen Avakov wrote on Facebook.

"Provocation by the cynical aggressor will not be permitted on our territory."

Around 280 trucks are carrying more than 1,800 tonnes of "humanitarian supplies", including medical equipment, baby food, sleeping bags, and electric generators, according to Russian media.

"A number of important issues still need to be clarified between the two sides, including border crossing procedures, customs clearance and other issues," ICRC spokeswoman Anastasia Isyuk said.

Mr Putin has justified sending the aid due to the "catastrophic" situation in the besieged rebel strongholds of Lugansk and Donetsk, where officials have warned of a looming humanitarian disaster because of shortages of food, water and power.

But there are concerns by Ukraine and the West that Russia could use the operation as a cover for sending in troops.

Ukraine has said the trucks would be stopped at the border for any aid to be unloaded and transported into conflict-torn eastern Ukraine with the help of the International Committee of the Red Cross.

Russia has given a "general list" of goods on its relief convoy to Ukrainian authorities and the ICRC.

However, the aid agency said it needs a detailed inventory to be able to receive them.

Russian Foreign Minister Sergei Lavrov said yesterday that an agreement had been reached for the trucks to be inspected by Ukrainian authorities before continuing on with ICRC and Ukrainian representatives on board.

But Ukraine, which has accused Russia of supplying the pro-Russian separatists with weapons, said no final agreement had been reached with the ICRC.

"I can say that Lavrov's statement is not true. Talks between the Red Cross and Russia are still continuing," said a source close to Ukrainian authorities.

Important details still need to be clarified, like content & volume of aid. We're in touch with #Ukraine and Russian authorities about this.

The United Nations estimates that the death toll in the conflict in Ukraine has nearly doubled to 2,086 as of 10 August from 1,129 on 26 July.

It said that nearly 5,000 people were wounded in the fighting since mid-April through to 10 August.

The UN said figures for casualties include Ukrainian soldiers, armed groups and civilians, but added that they are "very conservative estimates".

EU foreign ministers are to hold an emergency meeting on Friday to discuss the situation in eastern Ukraine.

Twelve Ukrainian nationalist fighters, battling a pro-Russian insurgency in eastern Ukraine, were killed when rebels ambushed their bus, a spokesman for their group said.

An unknown number of fighters were also taken captive.

The separatists opened fire on the bus, which was taking the men to fight just outside the rebel-held city of Donetsk, at the nearby village of Mandrykino.

Details were released by Artem Skoropadsky, a spokesman for Right Sector, extreme nationalists who are supporting government forces.

Those events set off a confrontation with Russia and sparked the worst Russia-West crisis since the end of the Cold War. 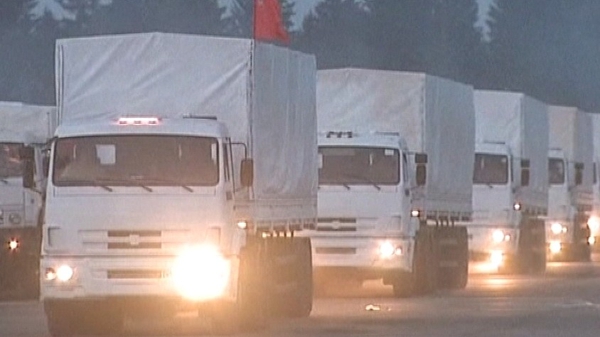