UN Secretary-General Ban Ki-moon has urged countries around the world to do more for Iraqi civilians, who have fled the advance of Islamist militants in Iraq, and sought refuge in remote mountain areas.

"The plight of Yazidis and others on Mount Sinjar is especially harrowing," Mr Ban told reporters.

"I urge the international community to do even more to provide the protection they need," he said.

Thousands of members of the Yazidi religious minority are trapped on a mountain in northwestern Iraq with little food or water after Islamic State jihadists overran the region.

Earlier, UN rights monitors called for the global community to take urgent action to avoid a potential genocide against the Yazidi community.

"All possible measures must be taken urgently to avoid a mass atrocity and potential genocide within days or hours," said Rita Izsak, the UN's minority rights expert.

"Civilians need to be protected on the ground and escorted out of situations of extreme peril.

"The responsibility to protect populations at risk of atrocity crimes falls both on the Iraqi Government and the international community."

Meanwhile, an Iraqi politician who helped bring attention to the plight of besieged members of the Yazidi community has been injured in the crash of a helicopter delivering aid.

The pilot was killed when the helicopter, overloaded with rescued Yazidis, crashed during take-off on Mount Sinjar.

Yazidi MP Vian Dakhil was injured in the crash.

Her emotional appeal in parliament on the plight of people stranded on the mountain made her the public voice of her community.

Mr Kerry also ruled out sending US combat troops to the country.

"We are urging him to form a new cabinet as swiftly as possible and the US stands ready to support a new and inclusive Iraqi government and particularly its fight against ISIL," he said.

"There will be no reintroduction of American combat forces into Iraq. This is a fight that Iraqis need to join on behalf of Iraq."

Iraqi Prime Minister Nuri al-Maliki has ordered the country's security forces to stay out of the "political crisis" following fears they could intervene.

Mr Maliki, whose bid to remain in power has faltered, urged security personnel "to stay away from the political crisis and continue in their security and military duties to defend the country" in an online statement.

France's foreign minister has said his European colleagues should be recalled from their holidays for an urgent meeting about delivering arms to Kurds fighting Islamic extremists in Iraq.

EU envoys met today for an emergency meeting over the deepening crisis in Iraq.

In a joint statement, French President Francois Hollande and German Chancellor Angela Merkel said they wanted the EU to "participate as quickly as possible in the humanitarian operation under way to help the civilian population facing the acts of violence of Islamic State". 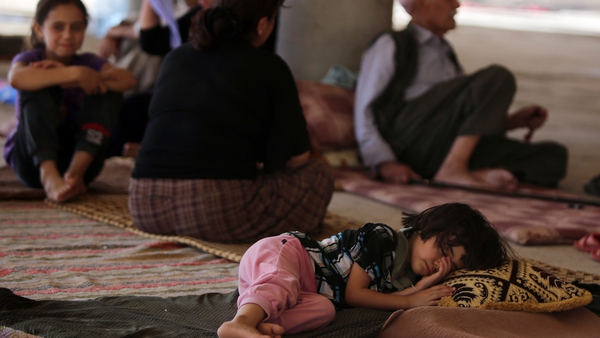