Human Rights Watch accused Egypt's government of trying to silence all criticism, after two senior staff were held at Cairo airport for 12 hours and then denied entry to the country for "security reasons," the group said.

Kenneth Roth and Sarah Leah Whitson had flown to Cairo to take part in the release of a report tomorrow on the mass killings of protesters by security forces last year.

The lengthy report comes after a year-long investigation, including interviews with more than 200 witnesses to the killings in July and August of 2013.

The report will be released tomorrow as scheduled.

Ms Whitson tweeted this morning that she had been held for 12 hours before deportation for "security reasons".

"We came to Egypt to release a serious report on a serious subject that deserves serious attention from the Egyptian government," Mr Roth said in a statement issued by the group.

"Instead of denying the messenger entry to Egypt, the Egyptian authorities should seriously consider our conclusions and recommendations and respond with constructive action."

Omar Shakir, author and principle researcher of the report said Ms Whitson had left Egypt and Mr Roth would be leaving on a separate flight later today.

Airport authorities said that Mr Roth and Mr Whitson had been turned back on instructions from unnamed security officials.

The officials said the two had informed authorities while having their passports checked on arrival that they were planning to participate in an event related to the one-year anniversary of the deaths of hundreds of Islamist protesters.

The Muslim Brotherhood, once Egypt's oldest, best organised and most successful political movement, has seen hundreds of its members killed and thousands detained since Mr Mursi's ouster.

Mr Sisi, who went on to win a presidential election in May,vowed during his campaign the Brotherhood would cease to exist under his rule.

Though the Brotherhood was initially singled out, Egypt has gone on to target secular and liberal activists prominent in the 2011 uprising that toppled Hosni Mubarak after 30 years.

Human Rights Watch closed its office in Cairo earlier this year but has continued to criticise the government.

It said in a joint statement with Amnesty International in June that Egypt was in the midst of "a human rights crisis as dire as in any period in the country's modern history." 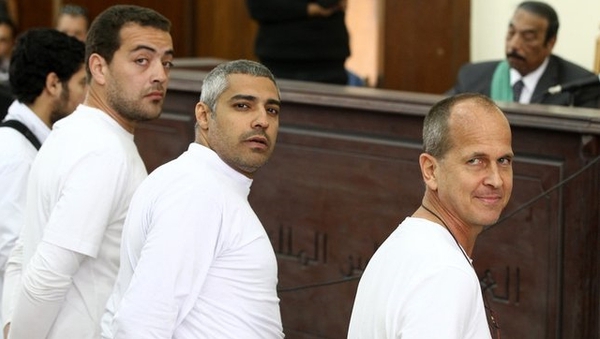 Journalists jailed in Egypt say they will appeal