The roadway and car park were flooded following torrential rain and people were advised to use extreme caution if travelling to the unit.

An investigation into the cause of the flooding is under way.

Severe flooding caused damage to 40% of the hospital in July 2013 and forced the closure of many departments.

A new emergency unit was officially opened earlier this year.

"Our investigation is at an early stage," hospital manager Seán Murphy said.

"It appears that the interim flood management measures worked well as the culvert was kept clear and other steps such as sandbagging of vulnerable areas were put into place.

"We are not going to speculate as to what these findings will be. We will publish the result of the investigation as soon as is feasible. More than anyone else in Donegal, we want answers."

Minister for State Joe McHugh, who is a TD for Donegal North-East, described the flooding as "massively disappointing".

He told RTÉ's News At One all possibilities must be explored to ensure this does not happen again.

Mr McHugh said solutions have to be very clear in relation to patient safety and to ensure this does not happen again.

The minister said it was a massive blow to the staff who have been through a very traumatic year and have made a major effort to restore facilities to normal. 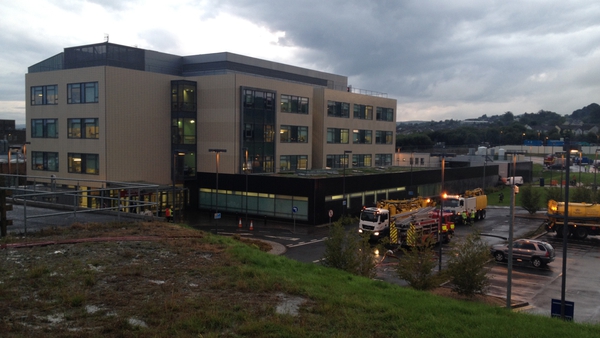