"I think that in current conditions, in order to ensure the interests of our producers, we could very well think about this now."

Meanwhile, the United Nations has said at least 285,000 people have fled their homes because of the conflict in eastern Ukraine.

The UN also warned that intensified battles in the area could lead to a "massive exodus".

Local Ukrainian authorities have so far registered 117,000 people moving out of the east to other regions of the country, the UN refugee agency said.

Vincent Cochetel, head of the UNHCR's European Bureau, told reporters in Geneva that the number "is in our view a low estimate".

He said this was because most men fleeing failed to register to avoid being drafted into the Ukrainian army and sent back to the conflict zone.

In addition, around 168,000 Ukrainians had as of 1 August applied to Russian authorities for asylum, refugee and other kinds of protective statuses such as temporary residence permits, Mr Cochetel said.

The total of at least 285,000 displaced people marks a 24% jump from figures provided by the UNHCR last month.

But according to Russian authorities, more than 500,000 more Ukrainians have gone to Russia since January under the country's visa-free regime, without registering, Mr Cochetel said.

"According to the Russian authorities, and we believe that number is credible, there are about 730,000 Ukrainians who have crossed into Russia since the beginning of the year," he said.

"We don't call all of those people refugees," he said, adding that only some of the 168,000 who had applied for protective status fell into that category.

"But they are not tourists. We have seen them at the border. Sometimes they just walk across the border, some just with plastic bags, and many of them are really destitute."

The UNHCR said 87% of those displaced inside Ukraine had fled the main rebel strongholds of Donetsk and Lugansk, while the remainder were from Crimea, which was annexed by Russia in March.

The already staggering numbers of displaced people were rising fast, Mr Cochetel warned, saying that over the past two weeks, 1,200 people had been flooding out of Donetsk and Lugansk into other parts of Ukraine each day.

"Those people are leaving with very little," he said. "Some of them arrive with almost no belongings or got some of their belongings confiscated at checkpoints."

With the Ukrainian army closing in on Donetsk, there is a fear that intense fighting could move into the city centre, which is home to at least one million people.

Earlier, Russia said that more than 400 Ukrainian soldiers had sought refuge on its territory. 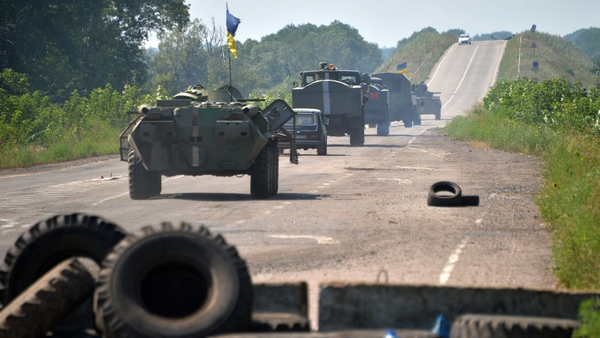