Rescue efforts are under way in China after an earthquake which left at least 381 people dead.

At 1,801 people were injured, the Yunnan provincial government said in a statement.

A total of 70 injured had already arrived at the hospital for treatment, CCTV said, adding that with many roads damaged by the earthquake, getting them to hospital has been slow progress.

The US Geological Survey said the quake registered at a shallow depth of less than 1.6km.

Chinese state media said it was felt most strongly in Yunnan as well as in the neighbouring provinces of Guizhou and Sichuan.

The government is sending 2,000 tents, 3,000 folding beds, 3,000 quilts and 3,000 coats to the disaster zone, where heavy rain forecast for the coming days will add to the misery, Xinhua said.

Many people rushed out of buildings onto the street after the quake hit, electricity supplies were cut and at least one school collapsed, Xinhua added, with more than 12,000 houses having collapsed and 30,000 sustaining damage.

This region of China is frequently struck by earthquakes, with one killing more than 1,400 in the same part of Yunnan in 1974. 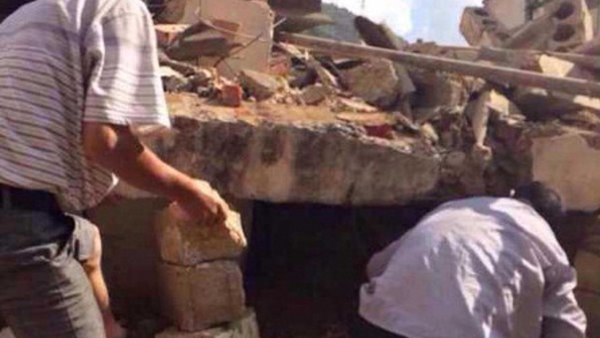