Hamas has said it has fired several rockets at Israel from Gaza.

The move comes after a 12-hour humanitarian ceasefire in the embattled Palestinian territory and despite a four-hour Israeli extension.

The Ezzedine al-Qassam brigades said in two separate statements that it had fired two rockets at Tel Aviv in central Israel, and five at Nachal Oz in the south.

Israel had agreed to suspend its bombardment of Gaza from 8am am to 8pm local time and later announced it would extend the truce for another four hours while its security cabinet met on whether to proceed with its military campaign in Gaza.

It was considering urgent world calls for a gradual but full cessation of hostilities.

The conflict in Gaza erupted on 8 July when Israel launched a vast aerial campaign and followed that with a ground attack.

More than 1,000 Palestinians, 40 Israeli soldiers and three civilians inside Israel have been killed.

Earlier, scores of bodies were recovered from rubble across Gaza during the 12-hour ceasefire.

Many people emerged from shelters to inspect their homes and to buy food.

Officials from the US, France, Britain and four other countries met in Paris to discuss ways to help achieve a permanent ceasefire.

German foreign minister Frank-Walter Steinmeier said that a ceasefire would only last if Gaza no longer served as a weapons depot for Hamas.

He also urged that living conditions be improved.

A spokesman for the Islamist group Hamas said all Palestinian factions would abide by the brief truce.

Hamas wants an end to an Israeli-Egyptian blockade of Gaza before agreeing to halt hostilities.

A number of protests, vigils and demonstrations were held across Ireland today.

The biggest was hosted by the Ireland Palestine Solidarity Campaign in Dublin, which was supported by other organisations including the Irish Congress of Trade Unions.

The Dublin demonstration started at the Spire on O'Connell Street and the rally marched to the Israeli Embassy where over 1,500 people listened to Palestinian and Irish speakers.

There were protests in Belfast, Cork, Derry, Limerick, Tralee, Waterford and many other places.

Pro-Palestinian protesters clashed with police in central Paris when hundreds of marchers defied a ban by French authorities to rally against Israel's offensive in the Gaza. 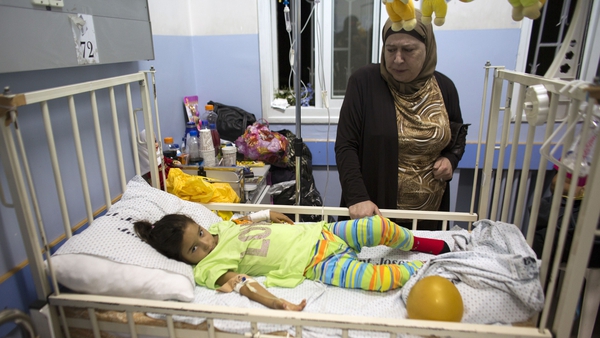 Israel confirms it fired into UN shelter in Gaza