A Liberian man hospitalised in Lagos with Ebola-like symptoms has died, an official said, without confirming the virus was the cause of his death.

The 40-year-old arrived in Nigeria from Monrovia on Sunday and was admitted to hospital after suffering from severe vomiting and diarrhoea.

He was placed in isolation because his symptoms were associated with the virus which has killed more than 650 people across West Africa in recent months, the worst-ever outbreak since Ebola first emerged in 1976.

The deceased patient's blood samples have been sent to a lab in Lagos and the World Health Organization in Dakar.

Nigerian officials said results from a third lab outside Nigeria must come back before a final determination on Ebola can be made.

Liberia has recorded 172 cases of the disease, including 105 deaths, since the outbreak began.

Yewande Adeshina, special adviser on health for the Lagos government, said "the immediate concern was not to create panic".

She said an emergency response has been rolled out, including efforts to find "those who might have had direct contact with the man in order to prevent the risks of infection."

However, she declined to comment on what type of infection they were trying to prevent.

Lagos, a severely congested city of more than 20 million people, has poor sanitation and a weak healthcare system.

Experts say that limiting the spread of the virus in a large city poses added complications compared to infections in more rural areas.

Ebola is believed to be carried by animals hunted for meat, notably bats.

It spreads among humans via bodily fluids including sweat, meaning a person can get sick from simply touching an infected person.

With no vaccine, patients believed to have caught the virus must be isolated to prevent further contagion. 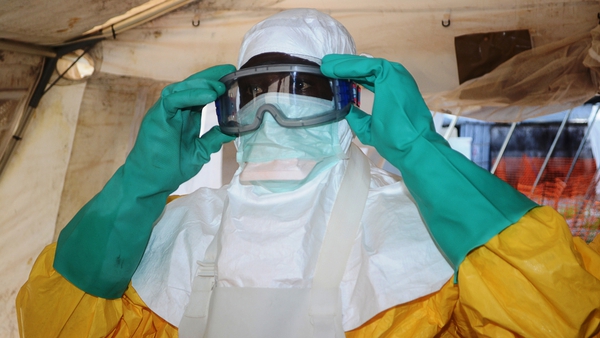 Liberian man being tested for Ebola in Nigeria