The bodies of the first victims from a Malaysian airliner shot down over Ukraine last week arrived back in the Netherlands amid dignified grief tinged with anger.

Bells pealed in memory of the 298 people, in the first national day of mourning since wartime Queen Wilhelmina died in 1962.

A military honour guard stood to attention as a lone trumpeter played The Last Post, the military funeral call for people killed in war. 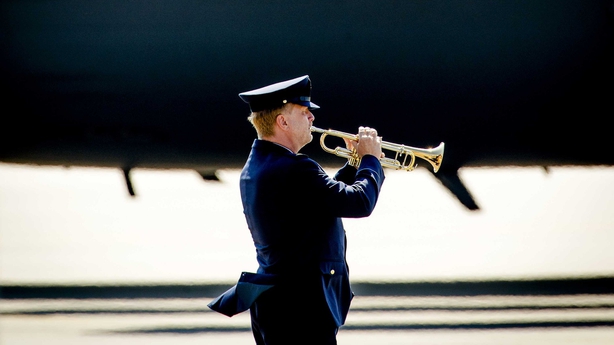 After a minute's silence - observed in stations, factories, offices and streets across a stunned nation - soldiers and marines boarded the Dutch Hercules C-130 and Australian Boeing C-17 to carry the coffins to 40 waiting hearses lined up on the runway. 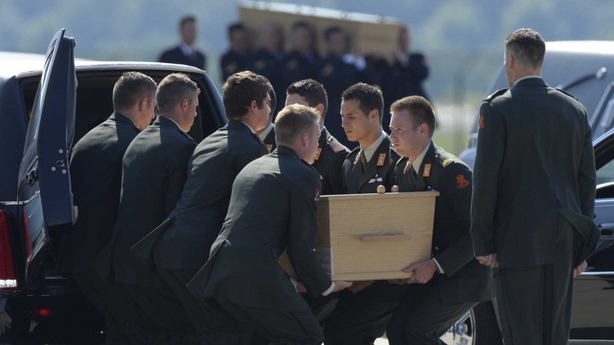 Relatives of some of the victims were present at the airport but were shielded from the media glare, officials said.

The bodies are being be transported to the city of Hilversum for identification.

Belgium's Radio 1 reports that 74 more bodies will be repatriated from Ukraine to the Netherlands on Thursday, adding that further repatriation would take place on Friday.

Around 160 bodies are currently in refrigeration units in the city of Kharkiv in eastern Ukraine.

More than 90 bodies or fragments remain at the rebel-held crash zone.

Mr Rutte has said the process of identification could take months.

Flags on public buildings across the Netherlands are flying at half staff. 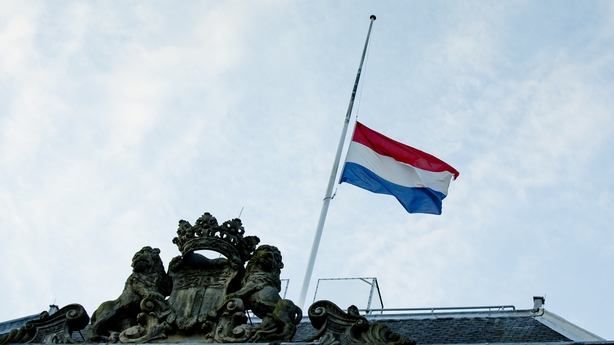 Dutch Foreign Minister Frans Timmermans said almost every family in the country of 15 million knew someone who died or their relatives, contributing to a national mood of shock and grief.

The delay in repatriating the bodies has caused widespread anger in the Netherlands.

This was compounded last night when Dutch forensics expert Jan Tuinder said 200 bodies had been located, rather than a figure of 280 claimed by rebels.

He said his investigators would return to the crash scene and not leave until all of the remains had been recovered.

A thoughtful message of concern and solidarity from the authorities at Schiphol Airport #MH17 pic.twitter.com/QpD8q6hIqs

Windmills around the Netherlands were set in a mourning position and church bells tolled just before the first military transport planes carrying the remains arrived from Kharkiv. 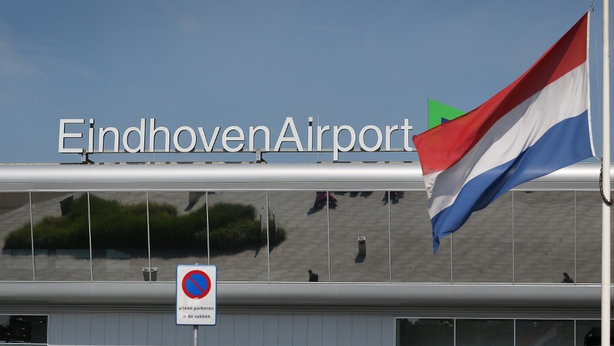 Trains came to a stop for a minute at 4pm local time as the country observed a minute's silence, Dutch Railways said.

No planes took off or landed at Schiphol Airport, from which the Malaysian Airlines flight departed, for 13 minutes around the time the bodies landed.

A silent memorial rally was planned outside the royal palace in Amsterdam's Dam square this evening.

Meanwhile, Australia's Prime Minister Tony Abbott has said it is possible that many bodies from the crash are still lying in the open in Ukraine.

"It's quite possible that many bodies are still out there, in the open in the European summer, subject to interference, and subject to the ravages of heat and animals," Mr Abbott said.

He called for a "full recovery search" of the crash site, saying such an operation was "necessary if all of the bodies are to be recovered".

The Australian leader added that he had "serious concerns" about the recovery of the victims' bodies.

A representative of the Organisation for Security and Co-operation in Europe said there are still human remains left where the Boeing 777 hit the ground in eastern Ukraine.

"We did not observe any recovery activity in place," spokesman Michael Bociurkiw said after his group inspected the site yesterday.

No evidence of tampering with MH17 voice recorder

Dutch lead investigators said that data from the cockpit voice recorder was intact and had not been tampered with.

"The cockpit voice recorder was damaged but the memory module was intact.

"Furthermore no evidence or indications of manipulation of the cockpit voice recorder was found," the Dutch Safety Board (OVV) said as the black boxes were being analysed in Britain. 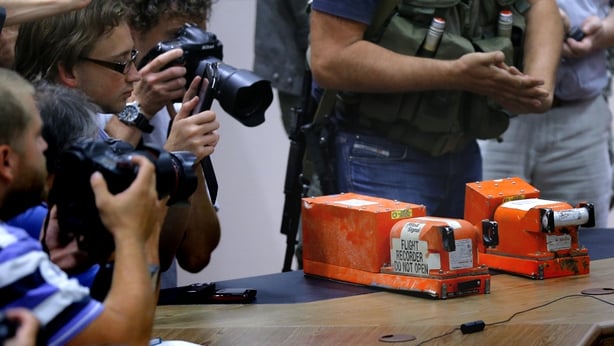 US intelligence officials have said evidence gathered so far suggests pro-Russian separatists launched the SA-11 surface-to-air missile that blew up the airliner.

Western governments have threatened Russia with broader sanctions for what they say is its backing of the militia.

However, they are struggling to agree a response, and European Union ministers meeting in Brussels yesterday delayed action for a few days.

Russian President Vladimir Putin said he would urge the separatists to allow a full investigation, which the Netherlands said it would lead.

Malaysia had said it would send the black boxes to a British lab for analysis.

Malaysian Prime Minister Najib Razak, speaking to parliament in Kuala Lumpur today, maintained his stand that blame should not be apportioned pending an investigation.

"A few hours after MH17 crashed, officials in the US and Ukraine claimed it was shot down," Mr Najib said.

"If that is true, we criticise the party believed to be responsible.

"However, we are not pointing fingers at anyone at this stage, until evidence has really been obtained."

Mr Najib's cautious approach enabled him to work through intermediaries to reach rebel leaders and broker a deal to retrieve the black boxes and secure the release of the bodies.

As they went about their work, loud explosions were heard on the outskirts of Donetsk, some 60km from the site.

The shooting down of the airliner has sharply deepened the Ukrainian crisis, in which separatist gunmen in the Russian-speaking east have been fighting government forces since pro-Western protesters in Kiev forced out a pro-Moscow president and Russia annexed Crimea in March.

A powerful Ukrainian rebel leader has confirmed that pro-Russian separatists had an anti-aircraft missile of the type the US says was used to shoot down  MH17 and it could have originated in Russia.

In an interview with Reuters, Alexander Khodakovsky, commander of the Vostok Battalion, acknowledged for the first time since the airliner was brought down in eastern Ukraine that the rebels did possess the BUK missile system and said it could have been sent back subsequently to remove proof of its presence.

Before the plane was shot down, rebels had boasted of obtaining the BUK missiles, which can shoot down airliners at cruising height.

However, since the disaster the separatists' main group, the self-proclaimed People's Republic of Donetsk, has repeatedly denied ever having possessed such weapons.

Since the airliner crashed the most contentious issue has been who fired the missile that brought the jet down in an area where government forces are fighting pro-Russian rebels.

Mr Khodakovsky accused the Ukrainian authorities for provoking what may have been the missile strike that destroyed the doomed airliner, saying Ukrainian forces had deliberately launched air strikes in the area, knowing the missiles were in place.

"I knew that a BUK came from Luhansk. At the time I was told that a BUK from Luhansk was coming under the flag of the LNR," he said, referring to the Luhansk People's Republic, the main rebel group operating in Luhansk.

"That BUK I know about. I heard about it. I think they sent it back. Because I found out about it at exactly the moment that I found out that this tragedy had taken place. They probably sent it back in order to remove proof of its presence," Mr Khodakovsky told Reuters.

"The question is this: Ukraine received timely evidence that the volunteers have this technology, through the fault of Russia. It not only did nothing to protect security, but provoked the use of this type of weapon against a plane that was flying with peaceful civilians," he said.

"They knew that this BUK existed; that the BUK was heading for Snezhnoye," he said, referring to a village 10km west of the crash site.

"They knew that it would be deployed there, and provoked the use of this BUK by starting an air strike on a target they didn't need, that their planes hadn't touched for a week."

"And that day, they were intensively flying, and exactly at the moment of the shooting, at the moment the civilian plane flew overhead, they launched air strikes. Even if there was a BUK, and even if the BUK was used, Ukraine did everything to ensure that a civilian aircraft was shot down." 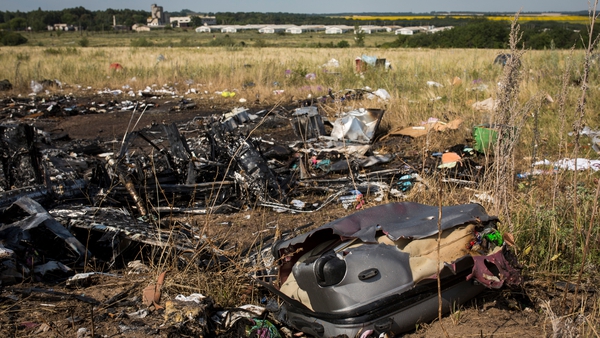 US intelligence sources MH17 likely brought down by 'ill-trained' rebels