The Philippines is clearing debris, reconnecting power and rebuilding flattened houses after a typhoon swept across the country killing 38 people.

Typhoon Rammasun was the strongest storm to hit the Philippines this year.

It is now heading northwest towards China after cutting a path across the main island of Luzon, shutting down the capital and knocking down trees and power lines, causing widespread blackouts.

More than 530,000 people had taken refuge in evacuation centres, according to official figures.

Damage to crops, mostly rice and corn, from the Bicol region southeast of Manila was estimated to be around 668 million pesos (€11m).

Most schools remained closed in the capital and southern Luzon, the most densely populated part of the country with about 17 million people.

The coconut-growing Quezon province south of Manila appears to have borne the brunt of Rammasun, which intensified into a category three typhoon as it crossed the country.

The cyclone is expected to make landfall in China around midday tomorrow somewhere between the island of Hainan and the southern province of Guangdong.

The Ministry of Civil Affairs has already put authorities on alert across a swathe of southern and southwestern China to deal with expected damage.

Torrential rain across a large part of southern China already killed 34 in the last week.

Tropical Storm Risk, which monitors cyclones, downgraded Rammasun to a category 1 storm on a scale of one to five.

However, it predicted it would gain in strength to category two within 24 hours, picking up energy from the warm sea.

Mr Pama said yesterday the government was more prepared after the devastation caused by Super Typhoon Haiyan in November.

They were evacuating people at risk in coastal and landslide-prone areas well before the typhoon made landfall.

Parts of the Philippines are still recovering from Haiyan, one of the biggest cyclones known to have made landfall anywhere.

It killed more than 6,100 in the central provinces, many in tsunami-like sea surges, and left millions homeless. 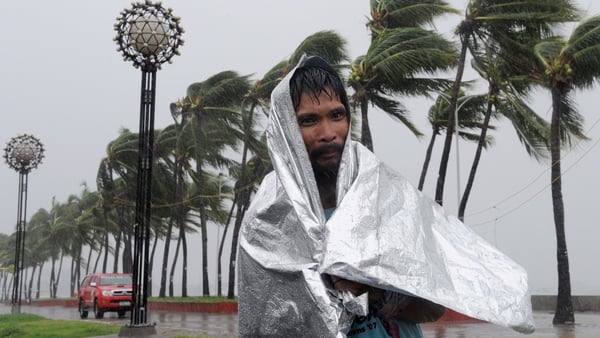