It was the deadliest day of violence in the coastal strip since 2012.

Israel has accused Hamas of firing hundreds of rockets into Israeli cities in recent days.

Air strikes on Gaza killed 23 people, including an eight-year-old child and two teenagers.

Israeli forces killed four Hamas militants who staged a beach front assault on an army base just north of Gaza.

In the worst strike, a missile slammed into a house in the southern city of Khan Yunis after people had reportedly formed a human shield to protect it, killing seven people.

Emergency services spokesman Ashraf al-Qudra told AFP two teenagers were among the dead and that at least another 25 people were wounded.

An eight-year-old child wounded in the strike later died of his injuries.

In response, Hamas said "all Israelis" would be potential targets for retaliation.

An early morning strike on a house in Beit Hanun in the north of Gaza killed six people, Mr Qudra said.

Earlier, three people were killed when a missile struck a car in the centre of Gaza City.

Relatives said all of them were Hamas militants, identifying one as Mohammed Shaaban, 32, a senior commander in Hamas's armed wing, the Ezzedine Al-Qassam Brigades.

He was also head of the group's naval operations.

The army confirmed targeting Shaaban, describing him as "a senior Hamas operative".

In a separate strike near Nusseirat refugee camp in central Gaza, another man was killed, with witnesses saying he was a Hamas militant.

Meanwhile, the army shot dead four men from the Brigades on a beach in Israel after they had infiltrated, not far from the Gaza border.

Soldiers on the base near kibbutz Zikim, just north of Gaza reportedly shot two of the militants, aircraft killed a third and the navy killed the fourth. 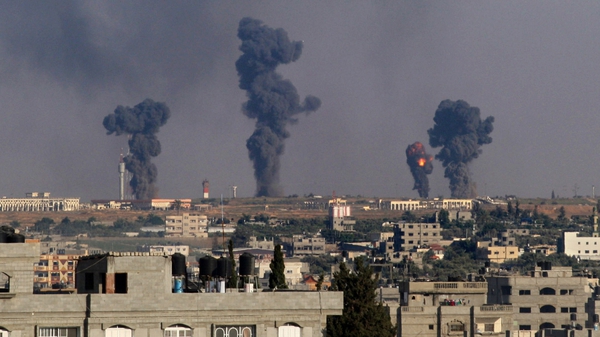