President Barack Obama said Monday he had sent up to 200 US extra troops equipped for combat, with surveillance gear and helicopters, to protect the US Embassy in Baghdad.

Together with a 275-strong embassy protection force already sent and another 300 US special forces charged with advising the Iraqi army, the deployment will mean nearly 800 US soldiers will be in Iraq

"In light of the security situation in Baghdad, I have ordered up to approximately 200 additional US Armed Forces personnel to Iraq to reinforce security at the US Embassy, its support facilities, and the Baghdad International Airport," Mr Obama said in a letter to Congress.

"This force is deploying for the purpose of protecting US citizens and property, if necessary, and is equipped for combat."

The Pentagon said in a statement that the new detachment had arrived in Iraq on Sunday and was also equipped with aerial drones to protect American personnel traveling away from the embassy -- possibly in an evacuation.

There are now 475 US soldiers available to protect the US embassy and American citizens in Iraq.

Of the initial deployment to the embassy of 275 troops earlier this month, 100 had been on standby outside the country, but are now moving into positions in Baghdad, the Pentagon said.

Meanwhile, the declaration of a caliphate by a group that has captured swathes of territory in Iraq and Syria is a message that it has become a threat to all countries, according to an Iraqi army spokesman.

The group, previously known as the Islamic State in Iraq and Syria, also known as ISIL, has renamed itself 'Islamic State' and proclaimed its leader Abu Bakr al-Baghadi as 'Caliph' - the head of the state, according to a statement it released yesterday.

Responding to the declaration, Iraqi army spokesman Qassim Atta told Reuters news agency that it was a message not just to Iraq or Syria but to the wider region and the world.

“The message is that Islamic State has become a threat to all countries," Mr Atta said.

"I believe all the countries, once they read the declaration will change their attitudes because it orders everybody to be loyal to it.”

Meanwhile, Iraqi troops have been battling to dislodge the group from the city of Tikrit today.

The government of Iraqi Prime Minister Nouri al-Maliki, with the help of Shia sectarian militia, has managed to stop the militants from reaching the capital Baghdad, but security forces have been unable to take back cities they abandoned in earlier fighting.

The army attempted last week to take back the city of Tikrit but was unable to seize the city.

Helicopters hit militants’ positions around the city overnight. On the southern outskirts, a battle raged into today, residents in the areas said.

Tikrit was the home city of Saddam Hussein, whose overthrow by US forces in 2003 ended a long history of domination by Sunnis over what is today a Shia majority in Iraq.

The fighting has started to draw in international support for Baghdad, two and a half years after US troops pulled out.

The US is flying armed and unarmed aircraft in Iraq's airspace but says it has not engaged in fighting.

Russia has sent its first warplanes to Baghdad, filling an order for five second-hand Sukhois.

The government said they will be operational within a few days. 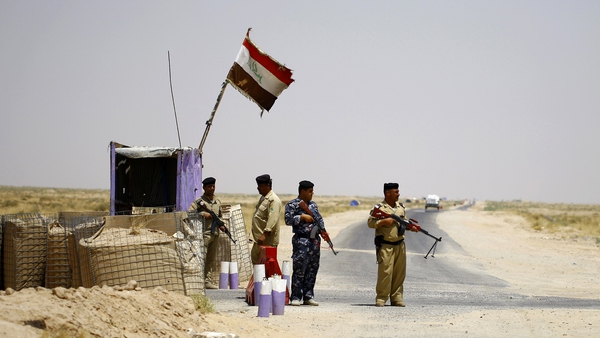