Fianna Fáil leader Micheál Martin has said the position of MEP Brian Crowley would be reconsidered if he were to rejoin the Alliance of Liberals and Democrats group and leave the European Conservatives and Reformists.

Mr Crowley lost the party whip today as a result of his move.

Speaking on RTÉ's Six One, Mr Martin said that the right wing grouping the MEP joined is not in any shape or form compatible with the views of Fianna Fáil.

He said Mr Crowley had been a very good member of the party for more than 20 years and he very much regretted that it had come to this.

However, he said that fundamentally, a party has to stand for ideas, policies and for principles and Mr Crowley's decision had been a step too far.

Mr Martin said the responsibility for losing the Fianna Fáil whip was Mr Crowley's, who he believed had made the wrong decision.

It is understood Fianna Fáil adopted the position without a vote on the urging of Mr Martin.

A statement after a party meeting today said that as a direct consequence of what it described as Mr Crowley's unilateral decision to join the ECR, Mr Crowley had removed himself from the Fianna Fáil Parliamentary Party.

The statement said it was not in the interest of the party or its members to have any association with the ECR.

Mr Martin told the parliamentary party meeting that Mr Crowley's actions played into the hands of the party's opponents.

He said he had learned of Mr Crowley's decision on Sunday night and had told him it was "totally unacceptable".

It is understood Mr Martin was backed at the meeting by TDs Timmy Dooley, Charlie McConalogue, Willie O'Dea and Colm Keaveney, as well as Niall Collins, with Barry Cowen insisting the MEP had "crossed a Rubicon" by his actions.

Chief whip Seán Ó Fearghaíl described the ECR as a "crowd of headbangers" and warned that they would make Fianna Fáil the laughing stock of Europe.

But it is also understood that TDs Éamon Ó Cuív, Michael McGrath and John Browne and Senator Mark Daly told the meeting that as Mr Crowley is in hospital at the moment he should be given the opportunity to address his colleagues before any action is taken against him.

Earlier Mr Ó Fearghaíl said his party was "reeling and indeed bewildered" by Mr Crowley's decision to leave the liberal group in the European Parliament and join the ECR.

In a joint statement yesterday with Fianna Fáil chairman Brendan Smith, Mr Ó Fearghaíl described Mr Crowley's move from the Alliance of Liberals and Democrats for Europe as "unacceptable".

They said Mr Crowley had contested last month's election under the banner of the liberal group to which Fianna Fáil had been affiliated since 2009.

Mr Crowley was elected as a Fianna Fáil MEP running under the ALDE banner six weeks ago and he has now made a "unilateral" decision to transfer to a grouping in Europe with which Fianna Fáil has "absolutely nothing in common", Mr Ó Fearghaíl said.

The chief whip said Mr Martin had discussions with Mr Crowley a few weeks ago about the issue of staffing.

Mr Crowley's decision came "completely out of the blue" and has taken the party by surprise.

There appears to be a "lack of logic in all of this", he said.

Speaking on RTÉ's Morning Ireland, she said there was speculation that Mr Crowley was "looking around for a new home" but, she said, she did not think that many people believed he would make this "not insignificant political jump" into the ECR group.

Politically, there are "huge questions" about Mr Crowley's decision to leave the group and go to the ECR and there are "political questions to be answered", Ms McGuinness said.

The ECR group is now likely to be the third largest group in the parliament and Mr Crowley will help strengthen its numbers and weaken the ALDE group, which Ms McGuinness said, Fianna Fáil will continue to be aligned to.

Ms McGuinness said she is not aware of any discussion of Mr Crowley joining the European People's Party.

Any talk of Fianna Fáil joining that group is "pure speculation", she said.

The European Commissioner for Research, Innovation and Science has said she is disappointed by Mr Crowley's decision to leave the liberal grouping.

Speaking to RTÉ News at the Euroscience Open Forum in Copenhagen, Máire Geoghegan-Quinn said Mr Crowley is a good friend with whom she had worked closely when she was minister for justice.

But she said Fianna Fáil is a member of the ALDE group in the European Parliament, and that is where she wants to see it stay.

As a result she said Mr Crowley's decision was "disappointing". 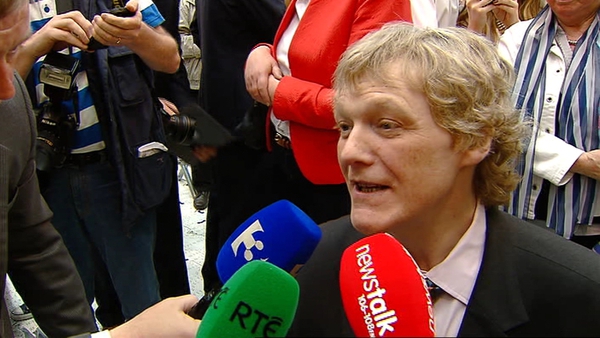