Minister for Agriculture Simon Coveney has rejected as untrue criticism from IFA President Eddie Downey that he is sleep-walking through the crisis engulfing farmers over beef prices.

Yesterday, farmers blockaded the entrance of the Department of Agriculture and staged a sit-in to protest about the issue.

The Irish Farmers' Association contends that Mr Coveney has not dealt effectively with the impact on farmers of falling livestock prices which, it says, is caused by severe and unfair beef regulations.

Speaking on RTÉ's Morning Ireland, Mr Coveney said he was more than aware that this was a difficult time for Irish beef farmers.

He said he had increased significantly the funds to Bord Bia to market Irish beef along with other measures.

The minister said the beef industry needs to come together to ensure everybody is getting a fair margin from the price of beef in difficult circumstances.

The minister said that beef consumption is down across Europe and it has been a tough year for beef farmers, but that he is fully committed to helping farmers maximise prices.

He said he has been quite critical of the processing industry for the lack of communication between factories and farmers.

Legislation is needed to represent producer organisations to allow beef farmers to negotiate price in a more effective way, he said.

Meat Industry Ireland Chairman Ciaran Fitzgerald has said all gains that have been achieved in the beef marketplace have been passed back to farmers.

Mr Fitzgerald denied any suggestion that beef processors and factories were operating a cartel to depress bull prices and said the reality was there was a weakness in demand for beef.

Also speaking on Morning Ireland, he said the industry had issued clear guidelines to farmers about the type of stock it required.

Speaking at the Teagasc Beef Open day in Grange in Co Meath today, IFA President Eddie Downey said there is real anger and frustration on the ground among the country's 100,000 livestock farmers.

He said it is incredible that the Mr Coveney would indicate that he is powerless and can do nothing with the meat factories over the way they are abusing farmers on the quality payment system and beef specifications cuts.

In addition, Mr Downey said the minister must address the lack of progress in removing the roadblocks impeding the live trade to Northern Ireland, vital for price competition.

Mr Downey said farmers do not accept that the minister is powerless with the factories.

He said: "The minister must address this issue immediately in order to restore confidence before more damage is inflicted on producers." 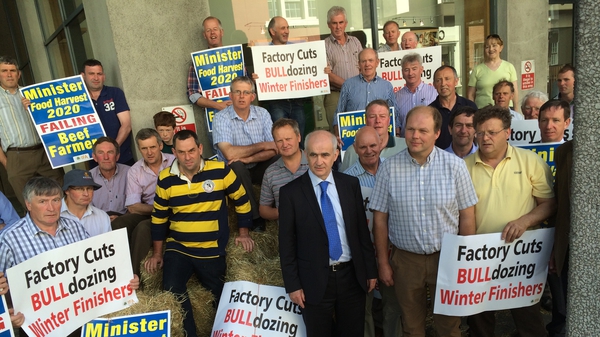