Tánaiste and Minister for Foreign Affairs Eamon Gilmore has begun a two-day trip to Washington DC to highlight the issue of the undocumented Irish in the United States.

The Tánaiste will meet both Republican and Democratic politicians during his short visit.

Mr Gilmore arrived late last night and met a number of people from the Irish-American community involved in the campaign for immigration reform.

Today, he had a number of engagements on Capitol Hill to discuss the case of the estimated 50,000 undocumented Irish people currently living in the US.

The Senate has already approved an immigration reform bill that would improve their situation.

However, reform proposals have stalled in the House of Representatives.

Nevertheless there is pressure for change from all immigrant communities, not just the Irish.

Mr Gilmore is also scheduled to speak with former US diplomat Dr Richard Haass about the ongoing efforts to reach agreement in Northern Ireland on flags, parades and the past.

He will also participate in a ceremony to commemorate the 150th anniversary of the death of several Irish immigrant women who perished in a fire at a civil war munitions factory. 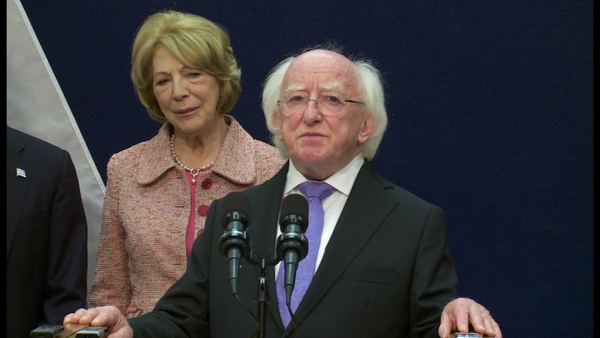 President Higgins optimistic for undocumented Irish in the US