Labour members from the west and northwest heard the candidates for the role of party leader and deputy leader outline their priorities at a meeting in Galway tonight.

It was the second of five nationwide hustings that are taking place in the lead-up to a postal ballot to decide on Eamon Gilmore's successor.

Around 100 party members attended the meeting.

They heard the four candidates for the deputy leadership set out their stalls when the proceedings got under way at 7.30pm.

Ciara Conway, Alan Kelly, Seán Sherlock and Michael McCarthy all stressed the role that grassroots members would have to play in rebuilding the party after the local and European elections.

In their contributions, leadership hopefuls Joan Burton and Alex White both referred to the need for Labour to play an active role in Government, particularly when it came to fiscal policy.

Mr White said a disconnect between members and the party in Government had to be tackled.

He ruled out a €2bn budgetary adjustment and said he wanted the party to be treated with esteem in its dealings with Fine Gael.

Ms Burton said the party could overcome its present difficulties.

She said Labour had to ensure that economic recovery was felt in people's pockets and that any tax relief would have to focus on low- and middle-income earners.

The meeting concluded after a number of questions from members, taking in issues ranging from wind farms and emigration to medical cards and rendition flights through Shannon.

Further hustings will be held in Cork, Portlaoise and Dublin.

Around 5,000 members have a vote in the leadership and deputy leadership elections. 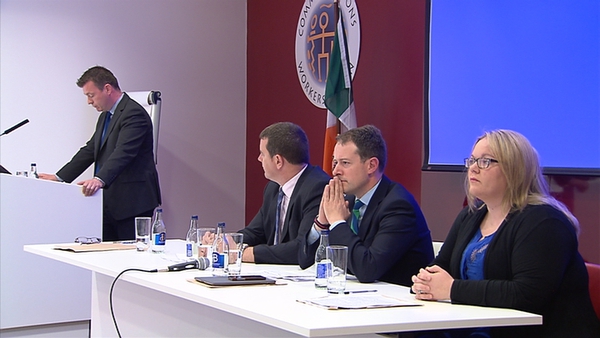