US President Barack Obama has said he is sending a small number of US troops to Iraq immediately to provide extra support and security for the US Embassy and US personnel in Iraq.

Up to 275 US military personnel will also help relocate some US embassy staff from Baghdad to US consulates in Basra and Erbil and to Amman in Jordan.

In a statement, the White House said the US military personnel were entering Iraq with the consent of the Iraqi government.

In a letter to Congress, informing them of the decision, Mr Obama said the troops were equipped for combat if necessary.

He said the force would remain in Iraq until the "security situation becomes such that it is no longer needed".

President Obama said he was dispatching the troops in line with his responsibility to protect US citizens and US national security and foreign policy interests.

Mr Obama has just recently arrived back in Washington DC, following a trip to California, and was scheduled to be briefed by the National Security Council tonight.

US Secretary of State John Kerry earlier said he would be open to cooperating with Iran on Iraq, and warned drone strikes were an option to halt a militant assault.

Mr Kerry said there is no question the Islamic State of Iraq and Syria (ISIS) militants, who are also known as ISIL, are focused on doing harm not just in Iraq and Syria, but also in the United States and Europe.

In an interview with Yahoo, he also confirmed that the US is open to discussions with Iran over the conflict in Iraq.

"I wouldn't rule out anything that would be constructive," Mr Kerry said when asked if the United States would cooperate militarily with Iran, one of Iraqi Prime Minister Nuri al-Maliki's key allies.

Mr Kerry also said that Mr Obama was carrying out "a very thorough vetting of every option that is available," including drone strikes.

He added that the US is "deeply committed" to the integrity of Iraq as a country.

Meanwhile, militants have gained ground in a battle for a strategic Shia enclave in northern Iraq that provides a corridor to Syria, officials and residents said.

Security forces, however, insisted they had repelled an assault on Tal Afar, a Shia Turkman-majority town in Nineveh province.

However, multiple officials and a resident said militants had entered it, with one saying they were in control.

The local official responsible for the town and surrounding areas, Abdulal Abbas, declined to say whether it was now in militant control.

But he said Tal Afar was dealing with "martyrs, wounded, chaos and refugees".

Mr Abbas said 200,000 people, which is nearly half the area's population, had fled, and asked for international assistance.

Resident Mohammed Khalil said militants had taken several districts but not the entire town, and added that families were fleeing to nearby Sinjar between Tal Afar and the Syrian border.

It had briefly held off a militant offensive that saw fighters led by the ISIS take control of vast swathes of territory of north and north-central Iraq in a matter of days.

The town has provided a crucial bulwark against militant-controlled territory on either side of Iraq's border with Syria.

However, interior ministry spokesman Brigadier General Saad Maan insisted to AFP that militants had not encroached on the town, proclaiming that fighters "do not control one metre (yard) of Tal Afar".

The Iraqi government of Shia Prime Minister Nouri al-Maliki is seeking to repel a stunning advance by Sunni militants who have seized several cities.

Fighters from ISIS have swept through towns in the Tigris valley north of Baghdad in recent days.

ISIS's advance may pose the worst security crisis to Iraq since the worst of the sectarian bloodshed that followed the US-led invasion to oust Saddam Hussein in 2003.

Mr Obama said on Friday he needed several days to determine how the United States would help Iraq fend off ISIS.

However, he ruled out sending US troops back into combat in Iraq. US troops left Iraq in 2011 after a bloody, costly war that lasted more than eight years.

If the US does decide to hold talks over Iraq with Iran, which it has routinely blamed for fuelling violence in Iraq since 2003, it is not clear where or how those talks would take place.

The Wall Street Journal, which yesterday reported the Obama administration was preparing for such talks, said one possible channel was through Vienna.

Senior US and Iranian officials were scheduled to meet there with other world powers today to negotiate limits on Iran's nuclear capabilities.

The US State Department said yesterday that the number two US diplomat, Deputy Secretary of State Bill Burns, would travel to Vienna this week to take part in the talks.

The White House cautioned that no discussions had yet taken place. 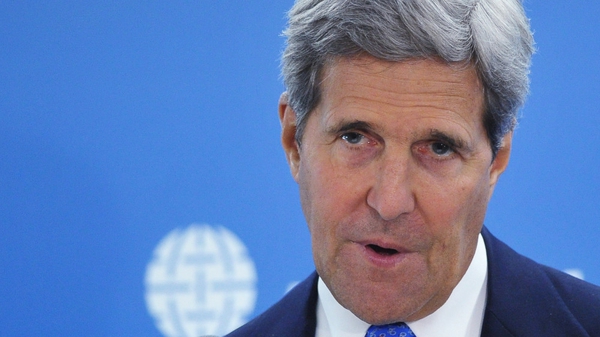