Taoiseach Enda Kenny has said he disregards completely the "hysterical response from a number of senators" to the Government's move to insure it has a majority on the banking inquiry.

He said there will not be politics on the Committee because the chairman has so ruled.

"It's not about personalities or inter-party squabbles ... but finding out what happened in the sequence of the banking debacle.

"For that reason, while events in the Seanad shouldn't have happened the way they did, I disregard completely the hysterical response from a number of Senators", he said.

Earlier the Government won the Seanad vote on adding two more senators to the banking inquiry.

Independent TD and banking inquiry member Stephen Donnelly this afternoon said he is thinking of quitting the investigation after the Government moved to ensure it has a majority.

Mr Donnelly said he could not believe it when he heard the Taoiseach say that there would have to be a Government majority before the inquiry's terms of reference could be agreed.

The Wicklow/East Carlow TD said the investigation had to be a cross-party inquiry and not one run by the Government.

He said he was considering whether to remain as a member.

Fianna Fáil's Finance spokesperson Michael McGrath has said the credibility of the inquiry has been damaged by the actions of the Government.

Mr McGrath told RTÉ's Six One News that the changing of the rules, to insure a majority for the Coalition, flies in the face of promises to provide an independent and impartial inquiry.

Earlier, the Government was accused of political skulduggery in the Seanad by proposing to ensure it has majority on the inquiry by adding two senators to the body.

The Government is now free to add Senators Michael D'Arcy and Susan O'Keeffe to the inquiry.

The nomination of Mr MacSharry meant the Government had a minority on the body.

Taoiseach Enda Kenny said the Government has to have a majority on the inquiry before terms of reference could be agreed.

He said it was "political skulduggery at the highest level".

Ivana Bacik, the Labour leader in the house, said Fianna Fáil had been playing politics with the inquiry.

She accused it of setting up an ambush at the selection committee - a charge she was later forced to withdraw.

Ms Bacik said the change would give the Seanad more representation on the inquiry and improve its gender balance and allow the Oireachtas to move on with its banking inquiry.

A member of the investigating committee, independent Senator Sean Barrett, said the failed bankers would be delighted at the Government’s actions in politicising the committee.

Sinn Féin finance spokesperson Pearse Doherty said the addition of two more Government senators has the potential to undermine the entire work of the banking committee.

Speaking on RTÉ's News at One, he said there was no need for the Government to have a majority on the banking committee, as it was not holding either the Government or government policy to account.

He described the addition of the two senators as "gerrymandering" and said it was playing into the hands of Fianna Fáil.

Yesterday, the Seanad Committee on Procedure and Privileges decided it could not intervene in the row involving the nomination of Mr MacSharry. 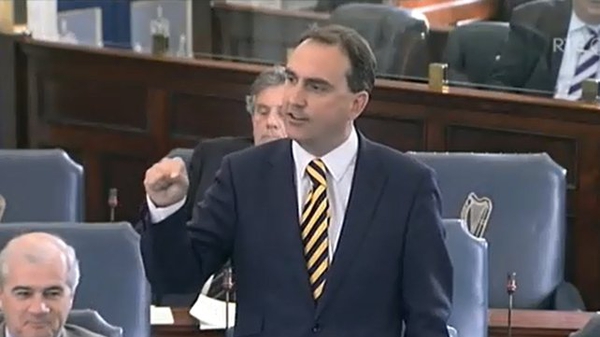