German Chancellor Angela Merkel has reaffirmed her support for Jean-Claude Juncker becoming the next president of the European Commission.

She was speaking after meeting EU leaders critical of the Luxembourger.

The informal meeting was held amid a high-profile campaign by Mr Cameron.

He has promised a referendum on Britain's continued membership of the European Union to prevent the former Luxembourg prime minister being nominated to head the bloc's executive arm.

Britain regards Mr Juncker as an old-style European federalist and says someone more open to reforming the EU and reducing the powers of Brussels should be picked, reflecting a widespread protest vote against the bloc last month. 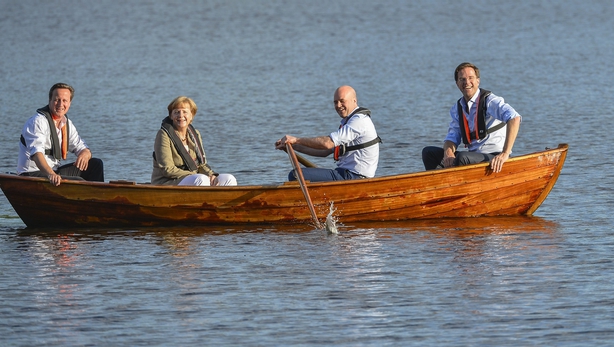 Mr Cameron had hoped the meeting could give more impetus to an alliance to block Mr Juncker, but a source in the British leader's office said discussions were "constructive but not resolved".

Playing for time, Mr Reinfeldt and Mr Rutte took no clear public position for or against Mr Juncker, saying that the policy agenda for the next Commission had to be agreed first.

"We have agreed that the future policy priorities of the EU must be decided before we can decide on appointments of different top jobs," Mr Reinfeldt said.

Mr Juncker has the support of the European People's Party, the largest centre-right political grouping in the European Parliament, which named him as its candidate before last month's European elections.

Mr Cameron has said EU leaders and not the European Parliament should nominate the candidate for Commission president.

The position is arguably the most powerful job in the bloc's institutions with major influence over policy affecting 500 million Europeans.

Taoiseach Enda Kenny tonight said the EPP had a congress and a contest and a vote and they had supported Mr Juncker.

Asked if he was interested in the post, the Taoiseach said that comments were made to him before the EPP congress in Dublin but said the matter is now irrelevant.

He added that the EPP has a candidate.