Two of Ireland's leading economists agree that the Government has little room to make any changes to Budgetary targets.

Economic and Social Research Institute Professor John FitzGerald and Stephen Kinsella, a senior lecturer in Economics at the University of Limerick, have said a €2 billion reduction in the Budget deficit is still likely to be required.

Speaking on RTÉ's Morning Ireland, Prof FitzGerald said there will be negative consequences if the Government misses its 3% deficit target.

He said it is too early to predict whether less than €2bn will be needed to meet this target.

Prof FitzGerald said even if €2bn is not needed, there are other difficulties to maintaining stability, including the Government's wealth tax on pension funds from next year and health budget overspends.

He said: "Even if we were right and you don't need the full €2bn, and €500m in water charges is brought in, there are a number of other difficulties.

"One, the Government has a very large wealth tax; €500m on pension funds last year and this year and they've next year, they're going to get rid of it.

"If they continue with that, they're going to have to find €500m elsewhere to fill that hole.

"Also the health budget is running over, and every €100m overspend is less that they have for next year."

Mr Kinsella said the Government must meet targets set in the memorandum of understanding with the Troika.

He said Ireland has gained credibility in international markets by sticking rigidly to targets set.

It is difficult to see, given the imposition of water charges, how any other large taxation measure could ensure that less than €2bn would be needed, he added.

Both economists say the Budget of 2016 will face different challenges, as the Department of Finance has committed to a further reduction of €2bn, the Government will be approaching a General Election, and they predict that the public will be suffering from "austerity fatigue".

Meanwhile, former Taoiseach John Bruton has said that budgetary limitations are likely to be faced for a number of years.

Speaking on RTÉ's Today with Sean O'Rourke, the president of Ireland's International Financial Services Centre (IFSC) said the fiscal compact treaty commits the Irish people to lowering debt from 120% of income to 60%.

Mr Bruton said slow economic growth means governments will have to run budget surpluses for the next number of years.

It is unwise to promise something to the public that cannot be delivered due to limitations agreed in the fiscal compact, he said.

Mr Bruton said whether €2 billion needs to be taken out of the economy in this year's Budget will depend on the rate of economic growth.

He added that across the world economic growth has been less than expected, which is especially difficult for Ireland given the country's dependence on exports.

Fine Gael TD Simon Harris has said the Government has to look at "giving something back" to the people when it comes to the next budget.

Speaking on Today with Sean O'Rourke, Mr Harris said if the Government was serious about reviving the domestic economy, people would have to see a bit extra on their payslip at the end of the month.

He said they had to start showing people the benefit of the work that has been done. 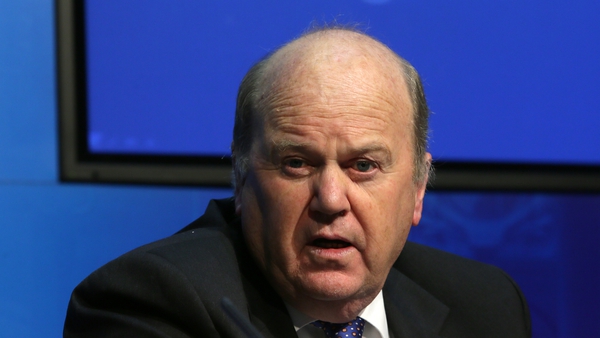