More than 50 pro-Russian rebels were killed in an unprecedented assault by Ukrainian government forces, which raged into a second day today.

It comes after a newly-elected president vowed to crush their revolt in the east once and for all.

Reuters journalists counted 20 bodies in combat fatigues in one room of a city morgue in Donetsk.

Some of the bodies were missing limbs, signs that the government had brought to bear overwhelming firepower against the rebels for the first time.

"From our side, there are more than 50 (dead)," prime minister of the rebels' self-styled Donetsk People's Republic Alexander Borodai told Reuters.

The government said it suffered no losses in the assault, which began with air strikes hours after Ukrainians overwhelmingly voted to elect 48-year-old Petro Poroshenko as their new president.

Russian President Vladimir Putin, who has declared Moscow's right to intervene to protect Russian speakers in Ukraine, demanded an immediate halt to the offensive.

Moscow also said it would not consider a visit by Mr Poroshenko for any talks.

Until now, Ukrainian forces have largely avoided direct assaults on the separatists, in part out of what they say is fear of precipitating an invasion by tens of thousands of Russian troops massed on the border.

But the government in Kiev appears to have interpreted Mr Poroshenko's big election victory - he won more than 54% of the vote in a field of 21 candidates, against 13% for his closest challenger, as a mandate for decisive action.

After rebels seized the Donetsk airport yesterday, Ukrainian warplanes and helicopters strafed them from the air and paratroopers were flown in as part of the assault.

Shooting carried on through the night and today the road to the airport bore signs of fighting.

Heavy machine gunfire could be heard in the distance in mid-morning.

On the road to the airport, a truck, the kind that rebels have used to ferry dozens of fighters across the region, had been obliterated by machine gun fire.

Blood was sprayed across the road and splattered as far away as a billboard seven metres above.

"The airport is completely under control," Interior Minister Arsen Avakov told journalists in the capital Kiev.

"The adversary suffered heavy losses. We have no losses," he added.

"We'll continue the anti-terrorist operation until not a single terrorist remains on the territory of Ukraine," First Deputy Prime Minister Vitaly Yarema said on the margins of a government meeting.

A hockey stadium in the city had been set ablaze, but the fire later was put out. 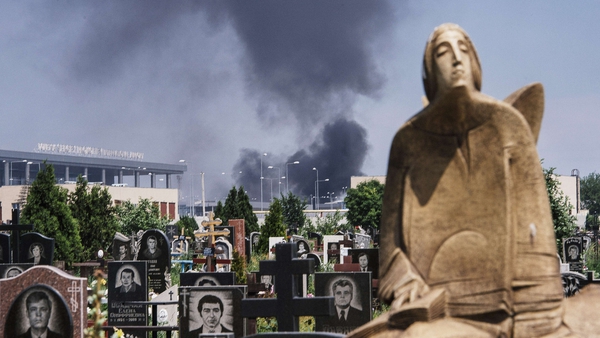 Heavy fighting at airport in Ukraine