Labour Party figures and other politicians have been reacting to the resignation of Eamon Gilmore as Labour leader.

Mr Gilmore informed the party's General Secretary this morning of his intention to stand down.

The Minister for Communications, Pat Rabbitte, said the Labour Party had to finish its term in Government, in order to ensure people's living standards improve.

Speaking on RTÉ's Drivetime this evening, he said that the role of leader of the party was now open to anybody who was able to sustain what he described as "one of the most difficult jobs in politics".

Mr Rabbitte said he would prefer not to endorse a candidate for the role of leader.

He said the cumulative affect of the recession had taken its toll on people.

However, he said Labour only made tough decisions in order to make the economy viable again.

Mr Rabbitte said he was "very sad" to see Mr Gilmore step down as leader of the party.

He said he had "no idea" what will happen in the Cabinet reshuffle, which he said was up to the Taoiseach and the Tánaiste.

The Labour TD for Kerry North deputy, Arthur Spring, has said he welcomes Mr Gilmore's resignation but he is not overjoyed.

Speaking on RTÉ's Six One, he said that it is appropriate that the party elects a new leader to regenerate itself.

He said Mr Gilmore was not being chased out of office and had not done anything wrong by the people.

However, he said his tenure as leader of Labour had not been to the betterment of the party.

Mr Spring said he was proposing that the party draws up a new policy on how it will affect middle Ireland and people who are less well off.

He said Mr Gilmore had played a phenomenal role along with the Taoiseach in giving Ireland an international reputation.

Mr Spring said there were other deputies who had greater experience and knowledge and he had to consult with his family before considering a leadership bid.

He said for the forthcoming contest Labour will be looking at more than personality in making its choice.

Meanwhile, Labour's Ciarán Lynch said he would not be contesting for the position of leader of the Labour Party following today's developments.

Speaking on RTÉ's Drivetime, Mr Lynch said Mr Gilmore's decision to step down as leader was the right one.

He said there had to be structural reform of the party following Mr Gilmore's decision to resign.

A number of decisions made by the Government, including water charges, could have been handled much better, Mr Lynch said.

He said there would be a number of meetings with Labour party members to decide who the new leader will be.

Labour Senator John Gilroy said he believed Minister of State Alex White should be the party's next leader.

Mr Gilroy paid tribute to Mr Gilmore but said it was time to refocus the Labour Party and move in a new direction with a new leader.

Mr Gilroy was among those who signed a no confidence motion in Mr Gilmore, and said he would welcome an open discussion as to where the party should go from here.

He said Labour had not been listening to the electorate in the last 12 months and people were very annoyed and angry as a result of that.

He said the party would need to be "deaf" if they did not hear what the electorate were saying.

Earlier, the Taoiseach thanked Mr Gilmore and Labour for their “[courage] in making the collective decisions that have pulled Ireland back from the brink of economic collapse and put the country on the path towards recovery”.

Reacting to the resignation, Sinn Féin President Gerry Adams said that while this was obviously a difficult day for Mr Gilmore and his family, "this is not about personalities, it's about policies.

"Quite clearly the voters have rejected the policies of this Government,” Mr Adams said.

"They have rejected the brutal agenda of relentless austerity, taking medical cards from sick children, water taxes and cuts to the most vulnerable.

Mr Flanagan compared the departure of Mr Gilmore to buying a can of cheap dog food and then labelling it as caviar.

He said the Labour Party was trying to change the cover but the contents would be the same. 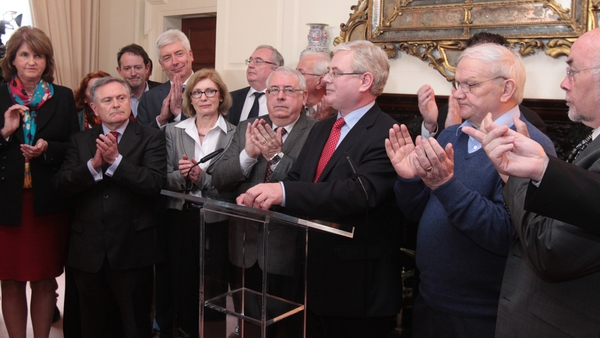