Swiss citizens have rejected the world's highest minimum wage of €18 an hour in a vote today, according to first projections.

The rejection brings relief to business leaders worried such a measure would have seriously damaged the Swiss workplace.

About 77% of voters dismissed the proposal made by Swiss union SGB and backed by the Socialist and Green parties, a national projection for Swiss SRF television showed, while 23% were in favour.

The vote is the latest in a raft of initiatives being put to voters to try and address the widening income gap in the generally egalitarian country.

Economically liberal Switzerland does not currently have a nationwide minimum wage.

Pay is determined by individual employment contracts or via collective bargaining agreements, some of which also set industry-specific minimum wages.

Popular votes have thrown up surprises before, most recently in February when the Swiss unexpectedly voted by a razor thin majority to curb immigration from the European Union, ignoring warnings from business that such a move would hurt the economy.

Anger has grown over the wages of executives in Switzerland, which have ballooned while those of low-income workers lag.

Supporters of the proposed minimum wage, which corresponds to a monthly pay cheque of 4,000 francs, say it would help smooth out salary inequalities and ensure a person working full time can live decently.

But critics say the measure would hurt competitiveness and lead to job cuts harming precisely the low-income workers it is designed to help.

Voters overwhelmingly backed a referendum last year to give shareholders a binding say over executive pay, but turned down a proposal to cap the salaries of top executives at 12 times that of a company's lowest wage.

Around 52% voted against a government proposal to free up funds to replace Switzerland's ageing fleet of Northrop F-5 Tiger fighters with the Gripen jets, according to a projection by Swiss television.

About 48% were in favour in the country which has not fought a war in 200 years.

Although both the Swiss upper and lower houses of parliament backed the deal, Swiss interest groups - including the socialists, Greens and the Group for Switzerland without an Army- secured a referendum by collecting the 50,000 signatures needed to force the popular vote.

The government had argued that Switzerland needed a modern fighter jets to support its armed forces and protect the country's stability.

But the deal would have required cuts in other areas, such as education. Opponents also warned the cost of keeping the jets in operation would likely spiral to at least 10 billion Swiss francs ($11.22bn) over their lifetime.

Sunday's result runs counter to a referendum last September, in which the Swiss public voted overwhelmingly in favour of keeping military conscription and bucks a trend for public support for the military. 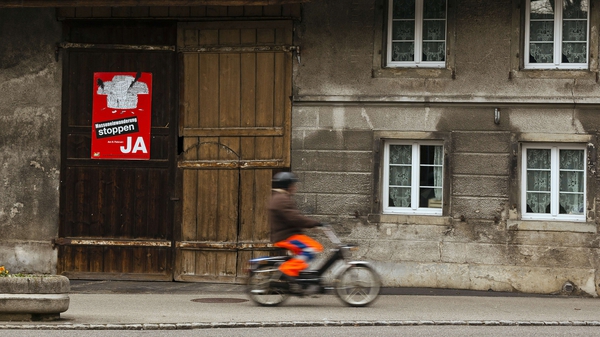 Europe to reassess relations with Switzerland after immigration vote