At least 24 people have been killed after a series of car bombs exploded across Baghdad during rush hour.

They are the deadliest attacks in the Iraqi capital since last month's election, from which votes are still being counted.

"I was trying to pick up a passenger when a fireball and a thunderous blast shook my taxi," said Kadhim Ali, a driver who narrowly escaped one of three explosions in the slums of Sadr City.

"I saw people with their clothes stained with bloodshouting for help."

Preliminary results from the 30 April parliamentary election are expected within the coming days.

Prime Minister Nuri al-Maliki, a Shia, is seeking a third term despite worsening violence that critics blame in no small part on his policies towards the country's Sunni minority.

There was no immediate claim of responsibility for the bombings.

There were blasts in several other neighbourhoods, and three soldiers were killed by a roadside bomb while patrolling in Doura district, security sources said.

The past year has seen violence return to levels unseen since the darkest days of the US military "surge" under President George W Bush, with hundreds of civilians killed every month.

Government forces are fighting Sunni militants across western Anbar province, northern Iraq and in the countryside surrounding Baghdad. Shia militia, once kept in check by Mr Maliki and the Americans, have resurfaced to join the battle.

Further north, a suicide bomber driving a car blew himself up at an Iraqi army checkpoint in Rashad, around 40km south-west of the disputed city of Kirkuk, killing five soldiers, security sources said. 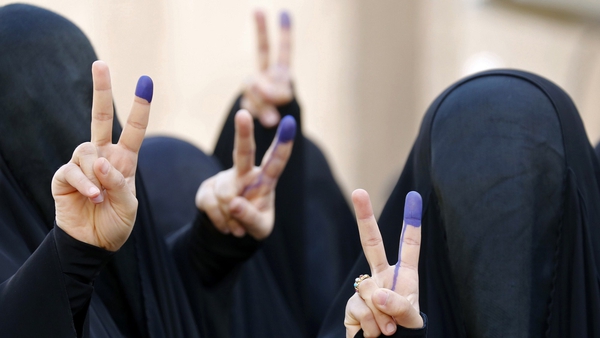