Nigeria's government has signalled a willingness to negotiate with Islamist militants holding more than 200 schoolgirls, a month after a mass kidnap that has provoked global outrage.

The committee was charged with talking to the Boko Haram militants who are behind a five-year-old insurgency.

"The government had set up a committee to negotiate with Boko Haram, so if they have any negotiation to make it should be channelled through the committee," Mr Turaki told Reuters.

He declined to comment on possible talks over the kidnapping itself.

Senior officials say the government is exploring options and there has been no commitment to negotiations for the release of the girls.

Boko Haram has killed thousands of people since 2009 and destabilised parts of northeast Nigeria, the country with Africa's largest population and biggest economy.

The abductions have triggered a worldwide social media campaign under the Twitter hashtag #BringBackOurGirls, and prompted the United States, Britain, France and Israel to offer help or send experts to Nigeria.

US surveillance aircraft were flying over remote areas of the northeast today.

The amnesty committee's initial six-month mandate expired without holding direct talks with the rebels, though it has spoken to them through proxies, according to senior government officials.

It has since been replaced by a standing committee empowered to conduct talks.

Mr Turaki was speaking a day after Boko Haram leader Abubakar Shekau posted a video offering to release the girls in exchange for prisoners held by the government.

The video showed more than 110 girls sitting on the ground in a rural location.

Though at least some of them are Christian, and Shekau described them as "infidels", they were wearing full Islamic veils and singing and chanting Muslim prayers.

It was not clear when it was filmed or whether Shekau, who sat in front of a green backdrop holding an AK-47 during part of the video, was in the same location as the girls.

Those shown were among 276 abducted on 14 April from a secondary school in the northeastern village of Chibok, in a sparsely populated region near the borders with Cameroon, Niger and Chad.

Some escaped, but about 200 are still missing.

The group initially threatened to sell the girls into slavery.

Mr Jonathan asked parliament today for a six-month extension of a state of emergency in the northeastern states of Adamawa, Borno and Yobe due to persistent attacks by Boko Haram.

After being accused of a sluggish response to the kidnapping, the government has sent thousands of troops to the region, while the US and Britain also have teams on the ground to help with the search.

The US State Department said Washington had sent in military, law-enforcement and development experts. 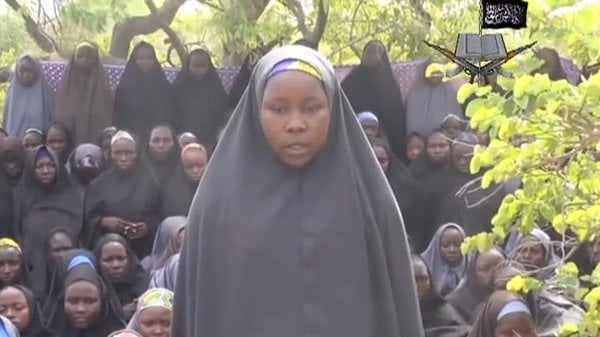