The UN Security Council has expressed outrage at the abduction of hundreds of Nigerian school girls in two attacks by Islamist militants, demanding their immediate release and threatening to take action.

Boko Haram kidnapped more than 250 girls from a secondary school in Chibok in remote northeastern Nigeria on 14 April.

It has threatened to sell them into slavery, while eight girls were taken from another village earlier this week.

US Ambassador to the United Nations Samantha Power said the UN Security Council should act quickly to designate Boko Haram as a terrorist group.

Boko Haram's five-year-old insurgency is aimed at reviving a medieval Islamic caliphate in modern Nigeria, whose 170 million people are split roughly evenly between Christians and Muslims,and it is becoming by far the biggest security threat to Africa's top oil producer.

"The members of the Security Council expressed their intention to actively follow the situation of the abducted girls and to consider appropriate measures against Boko Haram," the 15-member council, which includes Nigeria, said in a statement.

The statement "demanded the immediate and unconditional release of all abducted girls still in captivity and further expressed their deep concern at statements made by the alleged leader of Boko Haram threatening to sell these girls as slaves."

It also condemned the latest big Islamist attack in Nigeria, the killing of 125 people on Monday when gunmen rampaged through a town in the northeast near the Cameroon border.

Several countries, including the US, Britain, France and China, have offered support to Nigeria to help find the girls.

British experts including diplomats, aid workers and Ministry of Defence officials arrived in Nigeria yesterday to advise the government on the search.

Seven military officials along with a US State Department expert arrived in Nigeria yesterday to help search for the girls. Three FBI personnel and four others were due to arrive today.

UN Secretary-General Ban Ki-moon said on Thursday that Nigerian President Goodluck Jonathan had accepted his offer to send a high-level UN envoy "to discuss how the United Nations can better support the government's efforts to tackle the internal challenges."

Mr Ban said in a statement that he was deeply concerned about the fate of the girls and that "the targeting of children and schools is against international law and cannot be justified under any circumstances."

The mass kidnapping of schoolgirls in Nigeria was an "unconscionable act" of terror against the education of girls, US First Lady Michelle Obama said.

Speaking in her husband's place during President Barack Obama's weekly Saturday morning address, Michelle Obama said that this violence "was not an isolated incident ... it's a story we see every day as girls around the world risk their lives to pursue their ambitions."

"Like millions of people across the globe," Ms Obama said, "my husband and I are outraged and heartbroken over the kidnapping of more than 200 Nigerian girls from their school dormitory in the middle of the night.

"This unconscionable act was committed by a terrorist group determined to keep these girls from getting an education - grown men attempting to snuff out the aspirations of young girls."

"In these girls, Barack and I see our own daughters. We see their hopes, their dreams - and we can only imagine the anguish their parents are feeling right now," she said.

Ms Obama praised the courage of the parents to send the girls to school despite the threats, and of the girls going to class knowing "full well the dangers they might encounter."

The girls were "determined to one day build careers of their own and make their families and communities proud," she said.

US presidents issue a weekly radio address on a subject of their choosing. A video version is also posted on the White House website each Saturday.

Michelle Obama has appeared alongside her husband during the addresses, but this is the first time that she spoke alone.

Earlier this week, she expressed solidarity with the kidnap victims, tweeting a photograph of herself holding a placard bearing the slogan #BringBackOurGirls, the hashtag used as the rallying cry for a campaign calling for the schoolgirls' return.

President Barack Obama on Tuesday described the kidnapping as "heartbreaking" and "outrageous." 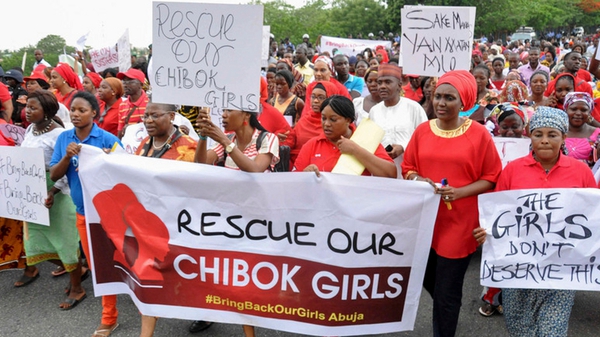