Syrian armed forces moved into Homs on Friday, combing through rubble-filled streets for booby traps and mines a day after hundreds of rebels left the central city as part of a deal with the government.

Standing in the Old City, which at the start of this week was a besieged area and active conflict zone, Governor Talal Barazi said Homs "is empty of guns and fighters. Engineers have started to clear the streets of mines."

Hundreds of residents arrived on foot to reach their homes in Hamidiya district, the first area to be secured. State television said two soldiers were killed on Friday during the de-mining operation.

In Hamidiya, which was under siege for a year, most buildings had been partially or completely destroyed.

Greek Orthodox Metropolitan Bishop George Abou Zakhem, who lives in Homs, told Reuters that 11 churches in the Old City had been destroyed during more than two years of fighting.

He accompanied soldiers and journalists to see the remnants of churches in parts of the Old City deemed safe by authorities.

Around 1,200 rebels and residents in the Old City of Homs left the city on buses this week in exchange for the release of dozens of captives held by rebels in the northern provinces of Aleppo and Latakia.

State television said that aid convoys also reached the two Shia towns of Nubl and Zahraa on Friday after rebels who are besieging the towns prevented the trucks for entering for two days. The humanitarian access was part of the government-rebel deal.

Officials said earlier that they would not allow 270 rebels granted safe exit under the deal to leave Homs until the aid arrived to Nubl and Zahraa. The Syrian Observatory for Human Rights monitoring group said later on Friday that the remaining rebels were now being bussed out.

John Ging, director of operations for the United Nations Office for the Coordination of Humanitarian Affairs (OCHA), told reporters in Geneva that the complex deal was brokered by the Iranian and Russian ambassadors to Syria.

Iran and Russia have been President Bashar al-Assad's strongest supporters during the crisis and world powers have called from them to exert pressure on the Syrian government for humanitarian deals.

"The agreements that you're seeing between the government and the opposition are evidence of what can be done," Mr Ging said.

More than 150,000 people have been killed in the Syria conflict, which has become increasingly sectarian as rival regional powers have backed either Mr Assad, a member of the Shia offshoot Alawite sect, or the overwhelmingly Sunni rebels who oppose him.

The fall of Syria's third largest city to government forces is a major blow to the opposition and a boost for Mr Assad, weeks before his likely re-election. 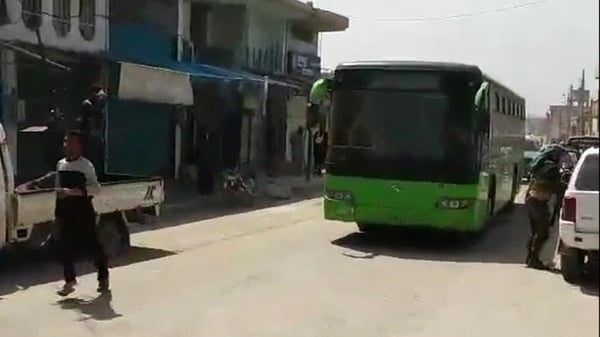