Alan Shatter's successor as Minister for Justice is expected to be announced tomorrow.

The Government Chief Whip, Paul Kehoe, told the Dáil the nomination of a Government Minister will take place in the House following Ministers' Questions.

Mr Kenny told the Dáil Mr Shatter had resigned following receipt of the report of Seán Guerin into allegations made by Garda Sergeant Maurice McCabe.

It is critical of a number of agencies including the Department of Justice.

The minister has taken responsibility for this and is stepping down.

The Taoiseach said the Guerin report will be published on Friday morning.

Read the full text of the Taoiseach's address to the Dáil

Fianna Fáil leader Micheál Martin said it would have been appropriate to have informed the Opposition on the Guerin report.

He said it had caused a significant degree of surprise and shock.

He asked if there had been consultations with the Tánaiste and when he could expect to get a copy of the report. 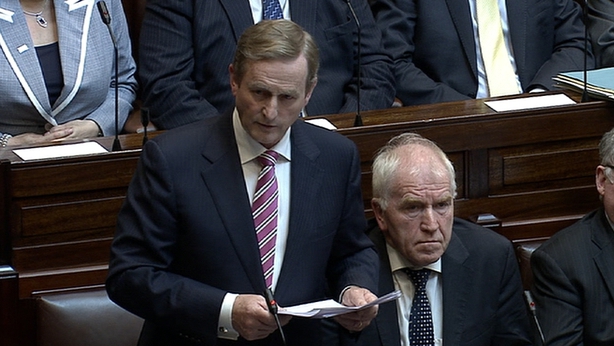 Mr Kenny said he had received a letter from the Minister for Justice and he said he had made it with a great degree of dignity.

He said it was a testament to his work ethic, the report came to the conclusion that there was inadequate analysis by a variety of agencies.

Mr Kenny said Mr Guerin's report came out of concerns he had raised.

He said the report was hard hitting and that the brunt of the report deals with An Garda Síochána and to a lesser extent the Minister for Justice.

He said the accompanying letter from Mr Guerin sent to him last night would have to take into account certain matters of privacy and he had asked the Attorney General to deal with that.

Mr Martin said he was still unclear as to the reasons that led to Mr Shatter’s resignation and he asked the Taoiseach to outline the detail.

He asked him to confirm that a Commission of Investigation was being set up and he asked about the role of the Garda Confidential Recipient and if Mr Kenny could shed any light.

The Taoiseach said the report was 300 pages long and that it was necessary to have a Commission of Investigation.

The report points out the inadequate response of the minister under his statutory function for independent analysis and it was in that respect he was resigning.

It was his feeling that this finding of inadequate use of his statutory responsibility that required him to tender his resignation.

He said Mr Guerin did not actually speak to the minister but was in possession of the documentation.

Sinn Féin leader Gerry Adams said no one in his party would take any pleasure in the resignation.

However, he said the minister defamed the whistleblowers and actively undermined the GSOC. 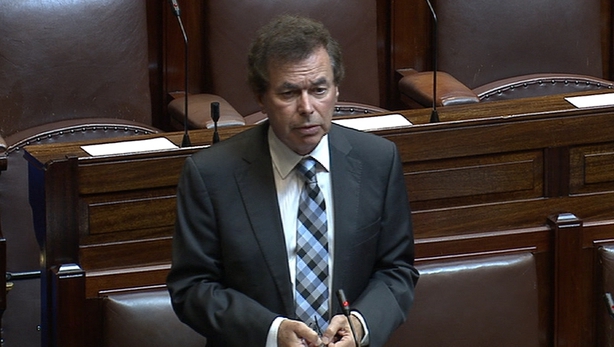 He asked Mr Kenny if he had sought the minister's resignation but the Taoiseach said he had not.

He said these were serious matters that would be treated seriously.

He noted that the Government had appointed Mr Guerin.

He said the report would be published with regard to parameters on privacy.

He said the Taoiseach had sought the resignation of Mr O'Dea.

Mr Adams said that if Mr Shatter had not offered his resignation, he would still be minister today.

He said all of these events highlight the need for fundamental reform and the Taoiseach had failed to do that.

The Taoiseach said Mr Shatter was not Mr O'Dea and that GSOC did not cooperate with Mr Guerin.

He said at no time was Mr Shatter interviewed by Mr Guerin.

He said the report's conclusion about inadequate use of statutory powers by the minister, led to the resignation.

Mr Kenny said he had not seen anyone with Mr Shatter’s work ethic.

Sources close to Sergeant McCabe say that he hasn't seen the Guerin report and will study it thoroughly before making a detailed response.

Sources also say that Sgt McCabe was interviewed by Mr Guerin on four separate days in relation to the allegations in the report and is now awaiting the terms of reference of the commission of inquiry.

Tánaiste Eamon Gilmore this evening expressed his appreciation to Mr Shatter for his “outstanding record of accomplishment” as Minister for Justice and Defence.

In a statement, he said: “While I believe that the minister's decision to resign was, in the circumstances, inevitable I want to pay tribute to Alan Shatter for his work in the Departments of Justice and Defence.

“Alan Shatter is a talented legal thinker who worked incredibly hard on his reform agenda. He has had many accomplishments during his time in office, including reform of the legal profession, modernisation of the Courts, landmark personal insolvency legislation and modernisation and reform of the prison service.

“He was Minister for Justice in difficult economic times and he has a record of which he should be proud. I wish him every success in the future.”

Wallace critical of support for Shatter

Earlier, Independent TD Mick Wallace repeated calls for Mr Shatter to stand down over his disclosure of personal information about Mr Wallace.

He said the Taoiseach and Labour's continuing defence of Mr Shatter was undermining their own support among the public.

He was commenting following the release of a report by the Data Protection Commissioner, which found Mr Shatter broke the law by disclosing personal information about the deputy.

Mr Wallace said he believed the public at large had lost confidence in the minister, and the longer Mr Kenny stood by him the more confidence would dissipate from the Taoiseach.

He also said he believed every time the Taoiseach stood by Mr Shatter he was losing support within his own ranks.

Mr Wallace said he was getting legal advice about what to do in light of the ruling.

Asked about the potential cost to the taxpayer if he did pursue legal action and lose, due to his debts as a result of unpaid taxes, he there were a number of legal people who had offered their services for free, so that if he did go to court it would not be at the expense of the taxpayer.

But he said he had failed to bring the accountability and transparency that is required to An Garda Síochána.

He said he was not expecting Mr Shatter's resignation but he had said a number of months ago that it would be a surprise if the minister would survive in office until the summer recess.

Deputy Wallace said his criticisms of the minister were not personal.

He also said he was disappointed with the minister's handling of the issues that he had brought before him.

Fianna Fáil TD Willie O’Dea earlier said Mr Shatter should consider his position after failing to meet the standards he set for ministers when he was an opposition TD.

Mr O'Dea also questioned the fact that so many Government deputies had supported Minister Shatter, despite the Data Commissioner finding he breached the Data Protection Act.

He said it is significant that "those who shouted so loudly about accountability and loose standards in Opposition" have rushed out to renew confidence in Minister Shatter "as soon as the ink has dried" on the Data Commissioner's report.

"The question arises, why is he not resigning when he has failed to meet his own standards about how a minister should behave?" 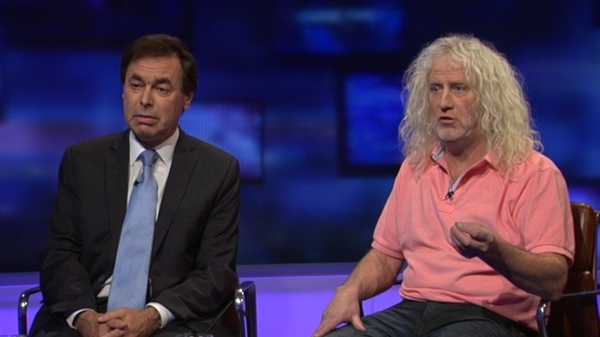