The United States has denounced moves by pro-Russian separatist groups in eastern Ukraine to organise what it called a "bogus" referendum.

Comparing Sunday's referendum to an earlier vote that preceded Russia's annexation of Crimea, State Department spokeswoman Jen Psaki said: "This is the Crimea play-book all over again."

"The United States notes with concern efforts by pro-Russian separatists in Donetsk and Luhansk to organise a bogus independence referendum."

Ukraine and its Western backers see Russia's main aims as making sure the planned referendum goes ahead, while sabotaging a nationwide presidential election due to be held two weeks later.

The West considers the 25 May presidential elections as crucial to restoring legitimacy to the leaders of the former Soviet republic.

They were installed by the parliament after pro-Russia president Viktor Yanukovych fled in the face of widespread pro-democracy protest.

Assistant Secretary for Europe Victoria Nuland said the presidential elections will be "the most pluralistic election that there has ever been in Ukraine", with some parties fielding more than one candidate after splits.

"And far more pluralistic than anything that's been seen in Russia," she said.

However, she voiced concern about whether the people in eastern Ukraine would "have the chance to vote for their candidate" given the tension on the ground with pro-Russia militias controlling several towns.

The OSCE was expected to send in 1,000 observers and the US was supporting a further 3,000 observers, she added.

"This will be the best observed transatlantic elections for many, many years," Ms Nuland said.

Ms Psaki also warned that "if Russia takes the next step" to move into eastern Ukraine and annex it, "harsh EU and US sanctions will follow".

Ukraine to back new talks if Russia supports poll

Ukraine is ready to back a new round of talks in Geneva in an attempt to de-escalate a political crisis with Russia as long as the government in Moscow supports the presidential elections.

"If Russia is ready to commit itself to support these elections and to eliminate this threat and eliminate its support for the extremist elements in Ukraine, we are ready to have such a round of meetings," he told a news conference.

He was speaking after a Council of Europe meeting in Vienna on the crisis in Ukraine.

Mr Deshchytsia said his government could support another round of Geneva talks if all the parties agreed to implement any document that would be agreed there.

"But ... the priority for Ukraine is to hold the presidential elections."

Russian Foreign Minister Sergei Lavrov said earlier in Vienna it would be "unusual" to hold a presidential election in Ukraine while the government was deploying the army against some of its people.

Mr Lavrov said opposition groups in Ukraine would have to take part in any new round of talks. 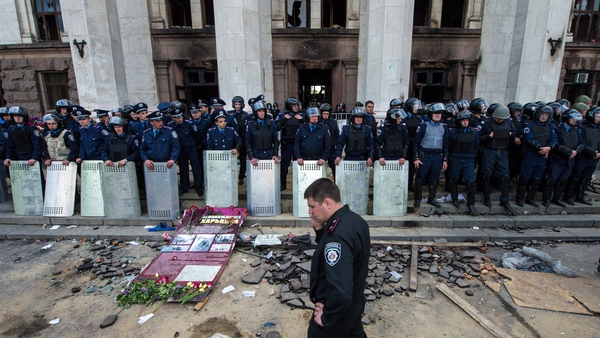