The General Secretary of the Association of Secondary Teachers Ireland has said he received a death threat and despicable references to his children and grandchildren on a website moderated by the union's members.

Pat King said he had told the union's Central Executive Council about the abuse.

He said the comments were made by a person on a Facebook page operated by a group called ASTI Fightback.

Later, he confirmed this individual was not a member of that group.

ASTI Fightback said it would not condone any post that was a personal attack on any individual. It said it was about political opposition only.

The group also said an individual not belonging to the group posted one negative personal comment, but it said it was unaware of any death threat.

It said as soon as it was made aware of the post it took it down.

ASTI Fightback said Mr King's comments were part of a smear campaign against it.

There were also angry exchanges on the margins of the conference.

The controversy came a day after Minister for Education Ruairi Quinn was booed and heckled by ASTI members at their conference in Wexford over the issue of Junior Cycle reform.

Mr King today said he could not sit by and allow any human being to be bullied in his presence.

He sternly criticised members who heckled and booed Mr Quinn.

Mr King said yesterday he had seen a man abused, shouted down and treated disgracefully.

He said that in a decent, effective democracy that was no way for teachers to communicate their anger.

Mr King asked delegates to decide which side they were on and said people either believed in free speech and dignity, or they did not.

There was applause on several occasions during Mr King's reprimand. However, a sizeable number of delegates did not join in.

Minister Quinn said the abuse of Mr King was unacceptable, intimidating and threatening.

He went on to say such actions have no place in a democratic society and he called for people to respect differences and to engage in peaceful dialogue.

He said: "Pat King has a job to do and it's ridiculous to have that kind of behaviour."

He said the row within the country's largest second level teachers trade union is "something they have to sort out themselves".

Meanwhile, the ASTI member who used a megaphone to shout at the minister yesterday has said he is baffled by the response to his actions in the media.

Andrew Phelan, a PE teacher in Dublin, said teachers around the country were struggling to pay mortgages and bills.

He said he did not see it as extraordinary that someone would take a megaphone out to speak to the minister, because he refused to listen.

"All I was asking for with the megaphone is that he take questions from the floor," Mr Phelan said.

"That's a simple request. That you engage with teachers, you take questions from ordinary teachers, in the classroom, not from our trade union leadership in some quiet little boardroom somewhere."

Meanwhile, the minister has said he will not defer plans to reform the Junior Cycle programme, despite calls from the ASTI to do so.

Mr Quinn said that secondary level unions have taken issue with him over plans to introduce the reforms.

He called on them to engage with him and discuss the detail of their concern.

Speaking on RTÉ's Today with Seán O'Rourke, he said that he has slowed down the introduction of the programme, which will take more than ten years to be fully implemented.

Mr Quinn said there will be a State exam at junior level, but that it was necessary to amend it for the times we live in.

The minister said the programme will be a mixture of written exams and project work, and this will be assessed by teachers themselves.

Mr Quinn said that although teachers have said they will not countenance doing this, he would like them to discuss their concerns with him and see how they can be addressed.

Earlier, Mr Quinn said his message to primary school teachers on the importance of higher level maths became confused during his address to INTO delegates in Kilkenny yesterday.

Mr Quinn said he was concerned with improving the level of mathematics teaching in Ireland.

He said what he was trying to say was that young girls who do higher level maths at Junior Cert level drop down to ordinary level at Leaving Cert because it requires less work.

Mr Quinn said because 15% of all entrants into teacher training colleges come from the top level of the Leaving Cert results, the system needs teachers who have higher level mathematics.

The minister said he had made the point badly.

Mr Quinn said the young girls doing higher level maths at junior level were well capable at doing it for the Leaving Cert.

However, because they see that they are not going to need higher level maths to become a teacher, they drop down to ordinary level.

Meanwhile, a merger of the two second-level teachers' unions is being considered.

The news was announced at the ASTI and TUI annual conferences yesterday.

TUI President Gerard Craughwell said that both unions needed to be together, at all times, and on all issues.

The time had come for them to set aside whatever historical differences there had been between them, he said.

Mr Craughwell said a merger would create a single, strong union of over 33,000 members and would have real muscle, both within the Irish Congress of Trade Unions and against Government.

ASTI President Sally Maguire made a similar call, asking how much stronger would their statement, protests and negotiations be, if they were done with one voice.

Campaigns against elements of the Junior Cycle reform programme are understood to have encouraged the idea of merging.

Ms Maguire said there was a window of opportunity between now and September for the minister to review some of his decisions and to defer the new Junior Cycle for a year.

She said she did not see teachers being willing to mark their own students' exam work.

Ms Maguire said there were a lot of very good things about Minister Quinn's Junior Cycle proposals, and a lot of things that teachers were very excited about, but the assessment overrode everything. 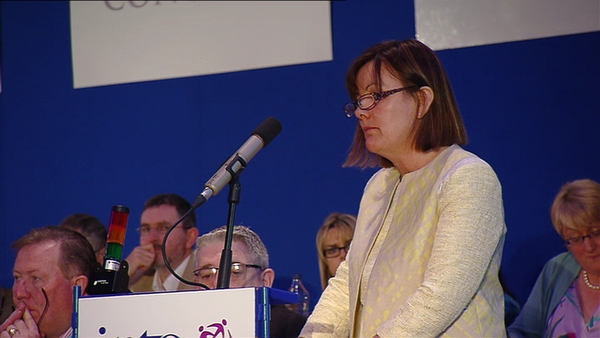