Thousands of marijuana enthusiasts gathered in Colorado and Washington state over the weekend for an annual celebration of cannabis culture.

Rallies, concerts and trade shows were held in the first two US states to legalise recreational marijuana.

Voters in both states approved ballot initiatives in 2012 allowing personal possession and use of marijuana by anyone aged 21 and or older for purposes of just getting high, though public consumption of pot remains illegal.

In January the world's first state-licensed retail marijuana outlets opened for business in Colorado, and stores in Washington are set to follow suit later this year.

Both states are among 20 that have already removed criminal sanctions for medical use of marijuana.

The federal government still classifies marijuana as an illegal narcotic, but the Obama administration has given states new leeway to experiment with legalised cannabis.

In Denver's Civic Center Park, revellers gathered yesterday to hear music and listened to speakers during a weekend event that organisers billed as the "world's largest 4/20 rally."

The date of 20 April, or 4/20, corresponds to the numerical code widely recognized within the cannabis subculture as a symbol for all things marijuana.

Police officers standing by on the fringes of the Denver festival issued 63 citations, most for smoking pot in public - a ticket that carries a fine of $150.

About half as many were cited on Saturday, police said.

At least eight people were taken to a detoxification facility for treatment during the two days, police said.

Separately, the Cannabis Cup, a trade show sponsored by High Times magazine, drew sold-out crowds over the weekend at a Denver convention venue.

The two-day event featured marijuana sampling and workshops, such as how to open a pot shop, cultivation tips, and how to talk to children about weed, according to the event's website.

Rachel O'Bryan, spokeswoman for Smart Colorado, an organisation that advocates for stricter enforcement of marijuana laws, said the cannabis industry needs to do more to police its own.

"People are flouting the law by openly consuming," she said. "We're concerned about the message that sends to our kids."

In Seattle, several hundred people who paid $15 a head crowded the cavernous interior of a former brewery where Rainier Beer was made for decades to attend a 4/20 gathering organised by sponsors of the city's annual Hempfest rally. 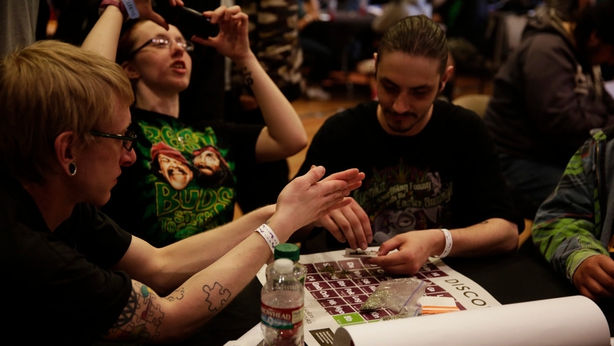 No police were visible at the event, which organisers deliberately held on private space leased from the brewery owners in an industrial section of the city south of downtown.

The gathering featured a workshop on how to roll a joint with an entire 28 grams of marijuana - the legal limit for personal possession in the state - as well as vendors selling pipes and other paraphernalia, and a blind-toke test in which participants tried to distinguish between different strains of pot by sampling them.

Attendees ranged from middle-aged baby boomers to a younger crowd from the so-called millennial generation.