Russian Foreign Minister Sergei Lavrov has told his US and German counterparts that the government in Kiev must refrain from violence and abide by its obligations under an agreement reached last week aimed at cooling tensions in Ukraine.

In a telephone call, Mr Lavrov urged U.S. Secretary of State John Kerry to "influence Kiev, not let hotheads there provoke a bloody conflict, and impel the current Ukrainian leadership to fulfil its obligations unflaggingly," the Russian foreign ministry said.

Mr Lavrov has accused Ukraine of violating an accord reached in Geneva last week aimed at averting a wider conflict.

The agreement called for an immediate end to violence in Ukraine, where Western powers believe Russia is fomenting a pro-Russian separatist movement, an allegation Moscow denies.

"Steps are being taken - above all by those who seized power in Kiev - not only that do not fulfil, but that crudely violate the Geneva agreement," he said.

Mr Lavrov also told a news conference that a deadly gunfight yesterday near a Ukrainian city controlled by pro-Russian separatists showed Kiev did not want to control "extremists".

A least three people were killed at a makeshift checkpoint near Slaviansk in what Ukraine officials said was a clash between "two groups of citizens".

The Geneva accord also called for illegal armed groups to go home in a process to be overseen by Europe's OSCE watchdog.

"This is absolutely unacceptable," he said.

The White House has warned of stronger economic sanctions than those already imposed if Moscow fails to uphold the Geneva deal.

"Before giving us ultimatums, demanding that we fulfil demands within two or three days with the threat of sanctions, we would urgently call on our American partners to fully accept responsibility for those who they brought to power," Mr Lavrov said.

He added that attempts to isolate Russia would fail because it was "a big, independent power that knows what it wants."

Mr Putin also said he had signed a decree rehabilitating Crimea's Tatars and other ethnic minorities, who suffered under Soviet dictator Josef Stalin.

"I have signed a decree to rehabilitate the Crimean Tatar population, the Armenian population, Germans, Greeks - all those who suffered during Stalin's repressions," Putin told a State Council meeting.

Members of the 300,000-strong Muslim Tatar minority, who make up 15% of Crimea's population, have opposed Russia's annexation of the region.

US Vice President Joe Biden has arrived in Ukraine for a two-day visit seen as a show of support for the interim government and will meet acting president Oleksander Turchynov and Prime Minister Arseny Yatsenyuk tomorrow.

The crisis in Ukraine began late last year when President Viktor Yanukovych turned his back on closer ties with Europe, prompting protests in the capital.

He eventually fled Kiev and a pro-Western interim administration took over.

Soon after, Moscow used its military to back separatists in Crimea, before Mr Putin signed a document annexing the peninsula.

The United States and European Union responded by imposing sanctions on Russian officials.

Russia, which has deployed extra troops on the border with Ukraine, says it is not interfering but has an obligation to protect the Russian-speaking community in the east from the rulers in Kiev, who it says are illegitimate, have ties to the far right, and discriminate against ethnic Russians. 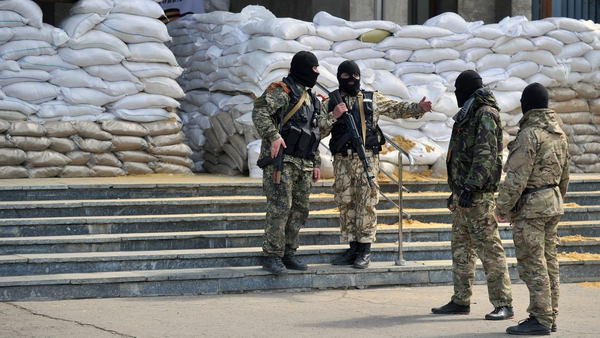 Some pro-Russian separatists in Ukraine to ignore Geneva deal News