Nepal has called off the search for three local guides still missing after the deadliest accident on Mount Everest that killed 13 of their colleagues, a tourism ministry official said.

"We have decided to stop the search for the missing.

"We have been unable to identify the location of bodies and at this stage it is difficult to find them in the snow," Dipendra Paudel told AFP.

The bodies of 13 guides have been pulled from the mountain.

Another nine guides have been rescued alive since the ice avalanche smashed into their expedition early on Friday.

Authorities yesterday ruled out hope of finding any more survivors, and officials have now decided to end the search for the remaining three guides.

The Sherpa guides were among a large party that left Everest base camp, to prepare routes for international clients before the main climbing season starts later this month.

The avalanche hit the Sherpas at an altitude of about 5,800 metres in an area nicknamed the "popcorn field" due to ice boulders on the route, which leads into the treacherous Khumbu Icefall.

Dozens of guides were on the move when a huge block of ice broke off from a hanging glacier, before splitting into smaller chunks and barrelling down into the icefall.

The disaster underscored the huge risks borne by local guides who ascend the icy slopes, often in pitch-dark and usually weighed down by tents, ropes and food for their clients.

The nature of their work means that Sherpas will usually make many more trips up the mountain and expose themselves to far greater risk than foreign climbers who pay tens of thousands of dollars to summit the peak. 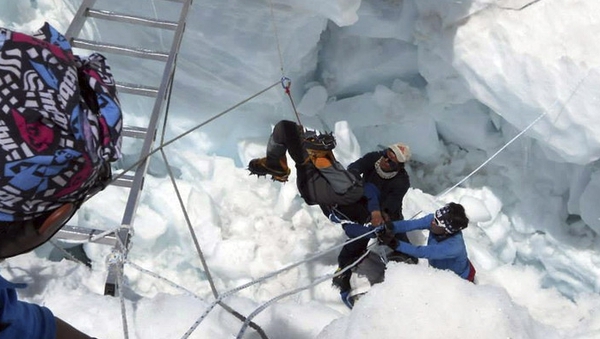