Pope Francis has prayed for peace in Ukraine and Syria in his annual Easter Sunday address in St Peter's Square in the Vatican.

In his Urbi et Orbi message and blessing, he also condemned the "immense wastefulness" in the world while many go hungry and the "neglect and dire poverty" behind the spread of the Ebola virus in Africa.

Marking the second Easter season of his pontificate, Pope Francis celebrated a mass to an overflowing crowd of at least 150,000 people. 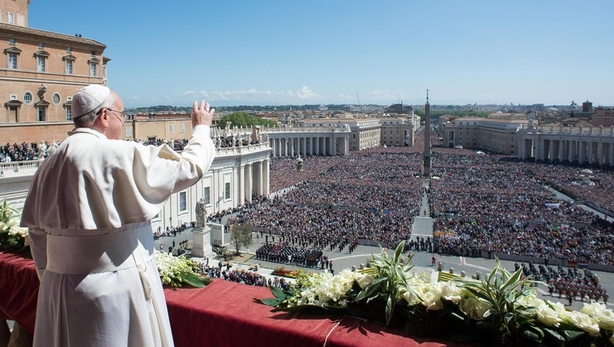 The crowd stretched back along Via della Conciliazione, the boulevard between the Vatican and the Tiber River.

Pope Francis weaved his message around the suffering of people across the globe.

He prayed to God to "help us to overcome the scourge of hunger, aggravated by conflicts and by the immense wastefulness for which we are often responsible".

Since his election as the first non-European pope in 1,300 years, Pope Francis has made defence of the poor a hallmark of his papacy.

He has often criticised developed nations and the excesses of capitalism and consumerism.

The 77-year-old pope prayed for the protection of those members of society who are particularly vulnerable to exploitation, abuse and abandonment; women, children, the elderly and immigrants.

Easter is the most important day on the liturgical calendar because it commemorates the day Christians believe Jesus rose from the dead after his crucifixion.

The Church sees it as a symbol of hope, peace and reconciliation among peoples and nations.

The Easter Sunday services were the culmination of four hectic days of Holy Week activities for the pontiff.