The Irish Times has apologised for publishing a controversial cartoon by its contributor Martyn Turner, calling it "an editorial lapse".

The cartoon, published on Wednesday, dealt with mandatory reporting requirements for priests on child abuse and portrayed a priest saying he "would do anything for children, but not that".

An editorial in this morning's newspaper said things sometimes "flew under the editorial radar".

The editorial said the cartoon had taken an unfortunate and unjustified "sideswipe at all priests", suggesting that none of them could be trusted by with children.

The cartoon had caused considerable offence, the paper said, and it regretted and apologised for the hurt.

Archbishop of Dublin Diarmuid Martin this week said many priests and people felt hurt by the cartoon, relating to the publication of the new child protection legislation.

The cartoon, captioned 'More Singing Priests' depicted priests singing while reading the new Children First Bill, with the words "I'd do anything for children (But I won't do that)".

The proposed legislation makes it mandatory for people in certain positions to report incidents of harm and the risk of harm to the Child and Family Agency.

In his homily at Holy Thursday Chrism Mass at the Pro-Cathedral in Dublin, Archbishop Martin said he was a strong believer in freedom of speech but objected to anything that would unjustly tarnish all good priests with the unpardonable actions of some. 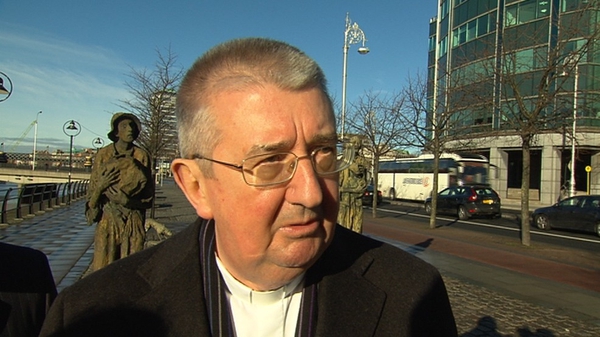