The Energy Regulator has proposed that Irish Water should pay a €10 charge when it fails to meet minimum standards.

The Commission for Energy Regulation proposes that the charge would come into force if Irish Water does not deal with customers complaints within five working days.

The charge would also come into force if it fails to issue accurate bills on a quarterly basis or if it fails to fix, free of charge, any damage to property during the installation of meters.

The Regulator also proposes the €10 charge should apply if Irish Water fails to deal sympathetically with customers who have difficulty paying their bills and who contact them.

It suggests the charge would also apply if it fails to provide a payment plan for them.

In its submission to the Regulator, Irish Water recommended that a standing charge should account for on average a third of the water bills.

It also recommends that overall the charges are split between water and wastewater and that the same tariff structure applies to both elements.

Irish Water recommends that there should be a reduction in the charge paid by customers where their water is unfit for consumption. This would apply in areas where boil notices are in place.

Irish Water also proposes that there is national charge for water and there is no geographical distinction made between different parts of the country.

Where households that are not metered, it proposes that there should be an assessed charge based on the number of people in the household and also the type of dwelling.

It also suggests a campaign should be launched to validate occupancy levels and also household types.

In their submission, Irish Water also recommends that after customers move from an assessed to a metered charge, they should have the option of having their bills capped at the previous assessed rate for six to 12 months from the installation of a meter. This could cover two to four bills.

Earlier today Tánaiste Eamon Gilmore told the Dáil there are still a number of issues that need to be addressed regarding the introduction of water charges.

Speaking during Leaders' Questions, Mr Gilmore said issues included the need to accelerate metering before charges come in and a rebate system to reduce the bill if water usage is lower.

The Labour leader said the €240 figure given for the average bill is less than the figure proposed earlier in the year.

However, he said: "It's still a big bill for any household having difficulty paying it."

Responding to the Fianna Fáil TD Willie O'Dea, Mr Gilmore said it was an issue he would liked to see dealt with quickly. 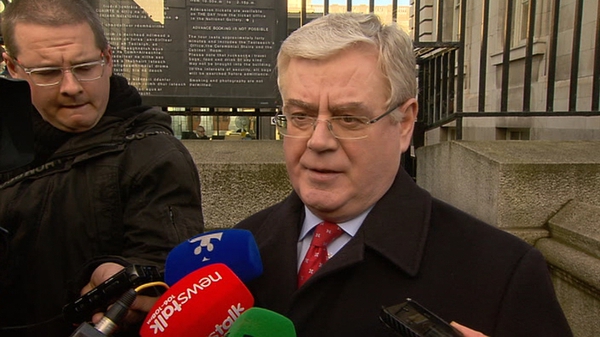