Taoiseach Enda Kenny has said homeowners will have a clear idea about how much they will have to pay in water charges before the Local Elections.

Mr Kenny was speaking in Co Mayo after reports this morning that Irish Water will charge householders a standing charge of €100 before any metering is carried out.

The Irish Independent reported that the measure is designed to give the new utility company a guaranteed income stream.

Minister for Environment Phil Hogan said no decision had been made about how water charges would be applied.

Speaking at the same event in Castlebar, Mr Hogan said the issue was on the Government's agenda and the process was under way.

It will be completed "in the next short while".

Mr Hogan said the Government had still to finalise its position in relation to standing charges, free allowances and pay-by-use costs.

He said as soon as a decision was made, the Commission for Energy Regulation would be able to provide people with information.

Mr Hogan earlier told RTÉ's News At One that Irish Water was entitled to make its own submissions to the commission in relation to charges.

The submission Irish Water that has made will form part of a public consultation process, which the CER will engage in shortly.

Earlier, Minister for Communications, Energy and Natural Resources Pat Rabbitte told RTÉ's Morning Ireland that if other utilities are looked at, such as electricity, it is not unusual that there is a small element of a standing charge.

Fianna Fáil leader Micheál Martin had called on the Taoiseach to put an end to speculation on water charges and to bring clarity to the issue.

He said it was absolutely unacceptable how the Government was treating people in relation to this issue.

Mr Rabbitte also told Morning Ireland that the policy of moving to more renewable energy resources will continue, despite the scrapping of a major deal to export renewable energy from the midlands to Britain.

He said that the British enthusiasm for the agreement "waned" as a fierce debate over the direction of its domestic energy policy continues.

Mr Rabbitte yesterday confirmed that the agreement would not go ahead.

However, Mr Rabbitte said: "This country has to take its responsibility and continue to decarbonise the energy system, and indeed, decarbonise our society.

"We have an extraordinary high target in [my own area of] energy where 40% of electricity will be generated from renewables. We're well on course." 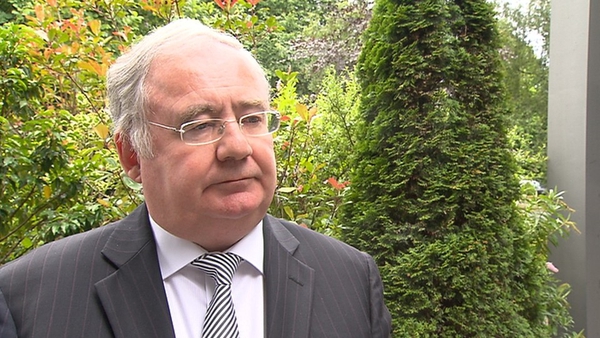 Midland energy export plan will not go ahead