Tánaiste Eamon Gilmore has announced that sanctions against Russia are to be expanded with more people added to the list subject to asset freezes and visa bans.

“We are issuing a very direct call on Russia to publicly repudiate this activity.

"The Foreign Affairs Council has also decided to expand the list of those to whom visa bans and asset freezes will apply.

“We also noted that any further steps by the Russian Federation to destabilise the situation in Ukraine would lead to additional and far-reaching consequences in a broad range of economic areas.

“Preparatory work is under way on Phase Three economic measures so that further steps can be taken should events require.

"Foreign Ministers also agreed to send an expert mission to Ukraine, organised by the European External Action Service, to prepare possible EU assistance in support of police and rule-of-law."

Meanwhile, About 100 pro-Russian protesters armed with bats and rocks have stormed a police station in the east Ukrainian town of Gorlivka.

An AFP correspondent in the town said the local police force, which put up almost no resistance to the attack, later swore allegiance to a pro-Russian commander who took charge.

Ukraine's interim president has signalled support for a national referendum on turning the ex-Soviet republic into a federation with broader rights for its east, where many want closer ties with Russia.

Pro-Kremlin militias, who have seized government buildings in cities such as Donetsk, are demanding local referendums on either broader local rights or an option to join the Russian Federation.

Acting President Oleksander Turchynov stopped well short of giving in to these demands by signalling support for a national referendum on Ukraine's future status.

The outcome of such a vote is far less certain, as most in Kiev and the Ukrainian-speaking west reject the idea of federalisation.

Mr Turchynov suggested that the national vote could coincide with snap presidential polls that Ukraine is set to hold on 25 May following the February removal of Russian-backed president Viktor Yanukovych.

"In recent days, there has been a lot of talk about a national referendum," Mr Turchynov told politicians in nationally televised remarks.

"We are not against holding a national referendum that - if parliament adopts the corresponding decision - could be held together with the presidential elections.

"I am certain that a majority of Ukrainians will support an indivisible, independent, democratic and united Ukraine.

"This is my conviction and I think that all those present share my view."

Pro-Russia protesters in the region fear a loss of their right to speak Russian and the collapse of an already depressed economy if their government cuts ties with their close and historical ally Russia.

Ukraine's new leaders have already struck a political partnership deal with the European Union and are expected to sign an economic relations and trade agreement later this year.

Meanwhile, a deadline for pro-Russian militants to hand over their weapons and leave buildings they have occupied in eastern Ukraine has passed without signs of rebels complying.

The authorities in Kiev set a deadline of this morning for armed separatists to leave public buildings they have occupied or face military action.

Russia last night urged Ukraine not to use force and rejected claims that it is orchestrating the unrest.

A spokesman for Vladimir Putin said the Russian President is watching the situation in Ukraine with great concern.

The United States, France and Britain all blamed Russia for the upsurge in violence in the region.

Russian Foreign Ministry Sergei Lavrov said Ukraine's Russian-speaking eastern regions should be involved in drafting the constitution that should be put to a referendum on the type of state Ukraine should be.

Mr Lavrov said it was not in Russia's interests for Ukraine to break up, but that Russia wanted all citizens of the country to be given equal treatment by the government in Kiev.

He denied Ukrainian and US allegations that Russia had undercover agents fomenting unrest in eastern Ukraine.

Meanwhile, a Russian fighter aircraft made repeated low-altitude, close-range passes near a US ship in the Black Sea over the weekend, the Pentagon said, condemning the action at a time of heightened US-Russian tension over Ukraine.

"This provocative and unprofessional Russian action is inconsistent with their national protocols and previous agreements on the professional interaction between our militaries," said Colonel Steve Warren, a Pentagon spokesman.

Mr Warren said a Russian Su-24 aircraft, or Fencer, made 12 passes at low altitude near the USS Donald Cook, a destroyer that has been in the Black Sea since 10 April. It appeared to be unarmed, he said.

Col Warren said the US ship was conducting a patrol in international waters in the western Black Sea at the time the passes took place. It is now in a Romanian port. 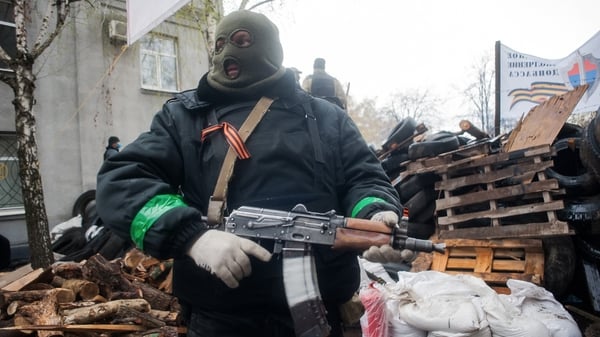