The Civil Public and Services Union has described revelations that the Health Service Executive will miss its Haddington Road Agreement savings target by almost €200m as "bizarre".

The CPSU, which represents lower paid civil servants, is holding its annual conference in Galway.

A report in today's Irish Times reveals that the potential shortfall was set out in a confidential consultants' report commissioned by health service management and presented to the Department of Public Expenditure and Reform on Thursday.

Under the 2014 HSE service plan, the health sector was to generate €290m in savings under Haddington Road, as well as a further €108m from unspecified measures to maximise the potential of the agreement.

However, PA Consulting has said that none of the €108m will be secured, while it expects that only €212m of the €290m target will be delivered.

CPSU General Secretary Eoin Ronayne said that the revelation of such significant shortfalls in savings was extraordinary.

He warned that his union would not enter any discussions about workers making up for miscalculations in other sectors.

Mr Ronayne, who participated in the Haddington Road negotiations, said one would assume that management would come to the table with their figures worked out.

He said civil servants felt that they had more than delivered their obligations under the agreement, and that management need not think they could come back to the table.

The HSE said it would be inappropriate to comment on the report.

The Department of Public Expenditure and Reform said each Government department was responsible for meeting its budgetary targets for 2014, including payroll savings.

It said that as agreed during the budgetary process and at the Cabinet sub-committee on health, the department was awaiting from the HSE an implementation plan regarding these savings.

He said the HSE, the Department of Health and Minister for Health James Reilly would have to identify where they will be making savings.

However, he urged them to ensure that cuts were not targeted at those who need services most, which he claimed had been the form of the government over the last three years.

He said it was very significant that they were admitting as early as April that they could not meet their targets.

Yesterday, CPSU president Joan Byrne accused the Government of reneging on a promise in the Croke Park Agreement to restore the pay of those earning less than €35,000.

On the first day of the conference, lower paid civil servants also said they would campaign to have their pay cuts reversed.

Government sources have this evening told RTÉ News that Health is the only public service sector that is failing to meet its Haddington Road Agreement savings.

It is understood that problems have arisen in translating millions of additional unpaid working hours into cash savings.

The extra hours have not led to a reduction in the bill for hiring agency staff and sources suggested there was a failure by local management to apply Haddington Road principles at local level.

The Department of Public Expenditure and Reform has reiterated that the Department of Health is responsible for delivering targeting savings and it is awaiting a HSE implementation plan.

Sources also warned that if the savings projects under Haddington Road are not secured harder choices might have to be made - with service cuts not ruled out. 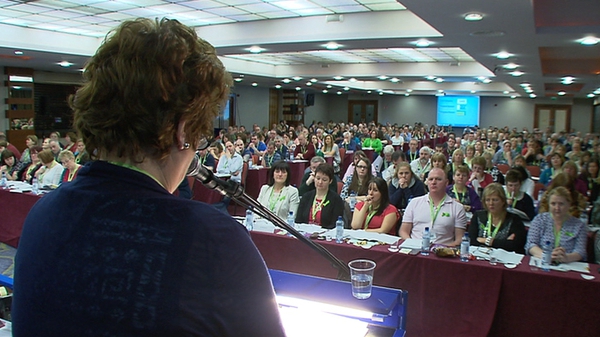