Guinea's government raised the death toll in the Ebola epidemic raging through its southern forests and capital to 95.

The health ministry added nine deaths to the toll of 86 given before the weekend, saying that 52 cases had been confirmed in laboratories to be the killer tropical virus.

"Up to now, the Guinean authorities have registered 151 suspect cases and 95 deaths," the ministry's chief disease prevention officer Sakoba Keita told AFP, without specifying the locations of the new deaths.

A number of patients have been discharged from Ebola treatment centres after beating the virus, medical charity Doctors Without Borders, which goes by its French initials MSF, said in a statement.

"When the first patient came out from the treatment centre, I was so happy and the whole team was cheering," Marie-Claire Lamah, a Guinean doctor working in MSF's treatment centre in Conakry, was quoted as saying by MSF.

Various studies, including a paper published in the New England Journal of Medicine last year, have demonstrated some immunity in survivors from the particular strain to which they were exposed, but life-long immunity has not been demonstrated.

MSF said it was working with local communities to ensure that discharged patients who have beaten the virus can return home safely, and that everyone understands they are no longer contagious.

"We explain to the families and neighbours that the patient is now negative and doesn't present any risks to anyone - they can be kissed, touched and hugged without any risk of contagion," says MSF health promoter Ella Watson-Stryker.

MSF has about 60 international staff working in Guinea, and has flown in more than 40 tonnes of supplies to tackle the epidemic.

The tropical virus can be transmitted to humans from wild animals, and between humans through direct contact with another's blood, faeces or sweat.

Sexual contact, or the unprotected handling of contaminated corpses, can also lead to infection.

Mali has become the latest of Guinea's neighbours to announce suspected cases of Ebola.

On Thursday it said that three victims had been placed in isolation while test samples were sent to the US Centers for Disease Control and Prevention.

With Liberia and Sierra Leone also reporting suspected cases, MSF has described the outbreak as an "unprecedented epidemic" and warned the unusual geographical spread of cases complicates the task of containing it "enormously". 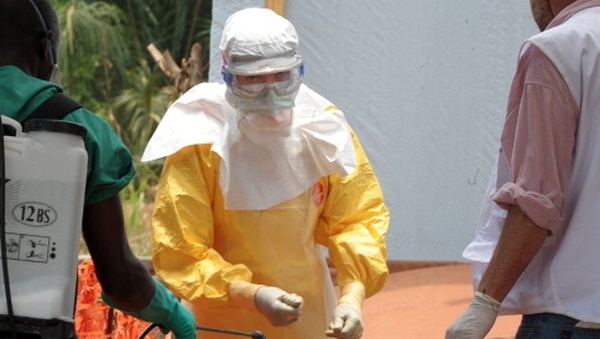