Tens of thousands of Taiwanese protesters have taken to the streets in Taipei in a bid to pressure President Ma Ying-jeou to retract a controversial trade pact with China.

The protesters crowded the streets leading to the presidential office, despite fresh concessions offered by President Ma to further scrutinise agreements with China.

Security was tight as 3,500 police were deployed in the official presidential neighbourhood.

The high security presence comes after violent clashes on 23 March, when a group of protesters stormed government headquarters.

More than 100 people were injured when baton-wielding riot police used water cannon to disperse demonstrators and retake the government building in that incident.

Organisers aimed to attract more than 100,000 people to today's protest and vowed to hold a peaceful demonstration.

An initial police estimate of the crowd was around 87,000.

"We will not react to any violent actions from the police or other groups. We will maintain peace ... any form of violence is totally prohibited in this movement," said student leader Lin Fei-fan.

Around 200 student-led demonstrators have occupied parliament's main chamber for nearly two weeks in a bid to stop the trade pact with China.

President Ma has sought closer ties with China since becoming the island's leader in 2008.

He said yesterday he would agree to demands that a law be introduced to monitor all agreements with China.

But he rejected the protesters' main demand - that the service trade agreement signed with China in June last year be retracted, saying it could "cause too much damage to Taiwan".

The pact is designed to open up further trade in services between China and Taiwan, which split 65 years ago after a civil war.

But the protesters say the deal will damage Taiwan's economy and leave it vulnerable to political pressure from China.

The deal is a follow-up agreement to a sweeping Economic Cooperation Framework Agreement signed in 2010 to reduce trade barriers between China and Taiwan.

President Ma has overseen a marked thaw in relations with Beijing since he came to power pledging to strengthen trade and tourism links.

China still considers Taiwan as part of its territory awaiting reunification, by force if necessary. 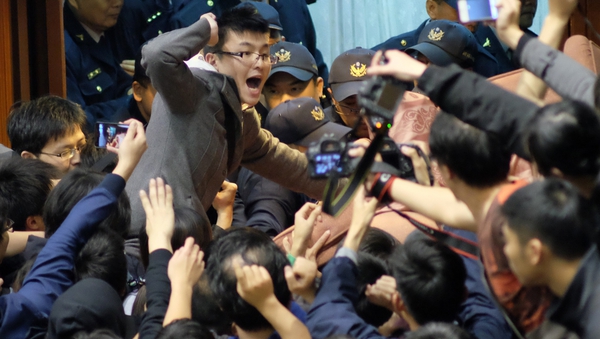