The number of people missing from a landslide that sent a wall of mud cascading over dozens of homes in the US state of Washington a week ago has dropped to 30 from 90.

Officials said they were able to account for dozens of people as "safe and well".

However, the death toll continues to climb as another body was found in the muddy heap of debris.

One week after the catastrophe, the unofficial body count rose to 28.

The official tally of those killed is now 18 based on bodies found, extricated and identified by medical examiners.

Rescue and recovery workers pushed through wind and rain yesterday, continuing to comb through debris left after the rain-soaked hillside gave way without warning.

It destroyed dozens of homes on the outskirts of the rural Washington town of Oso, northeast of Seattle.

"The number is so big and it's so negative. It's hard to grasp," said volunteer Bob Michajla, 66, who has been helping to search part of the debris field that covers 1sq.m (2.6sq.km).

"These are all friends and neighbours and family. Everybody knows everybody in this valley."

The process of identifying victims has been complicated by the fact that some bodies have not been found intact.

An estimated 180 people lived in the path of the landslide.

No one has been pulled alive from the rubble since the day the landslide hit, when at least eight people were injured but survived. Rescuers have found no signs of life since then.

The recovery operation has shown no signs of letting up.

Heavy equipment operators were working to complete a rudimentary service road for emergency workers connecting the two sides of Highway 530, which was washed out by the slide.

Ron Brown, a Snohomish County official involved in search and rescue operations, said the debris field may end up being the final resting place for some victims, who may be buried so thoroughly they cannot be found.

"That's going to be hallowed ground out there," he said. 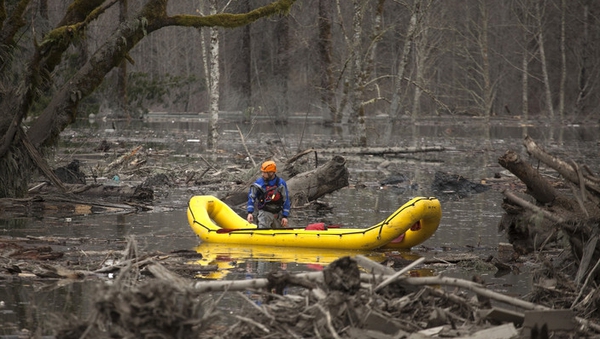