Sinn Féin leader Gerry Adams has questioned whether or not Attorney General Máire Whelan believed her phone was tapped.

Mr Adams said Ireland was now faced with an extraordinary and unprecedented situation whereby the Attorney General was not willing to discuss issues on the phone with Taoiseach Enda Kenny.

The reluctance of the Attorney General to speak about certain matters on the phone to the Taoiseach was confirmed by Mr Kenny in the Dáil during the week.

Mr Adams said that the Attorney General clearly felt that her phone may have been tapped.

The Sinn Féin leader also said that the party will be supporting the Fianna Fáil motion of no confidence in Minister for Justice Alan Shatter.

Mr Adams said the minister is not the person to lead the wide-ranging reforms needed in the justice system.

He was speaking at the announcement of Sinn Féin candidates for the forthcoming Local Elections.

People in all counties, north and south, will have the chance to vote for Sinn Féin candidates, he said.

Mr Adams said he expects even on a bad night that Sinn Féin will have its largest ever number of candidates elected.

The party is running 350 candidates in the Local Elections and one in each of the four European constituencies.

The election will be held on 23 May. 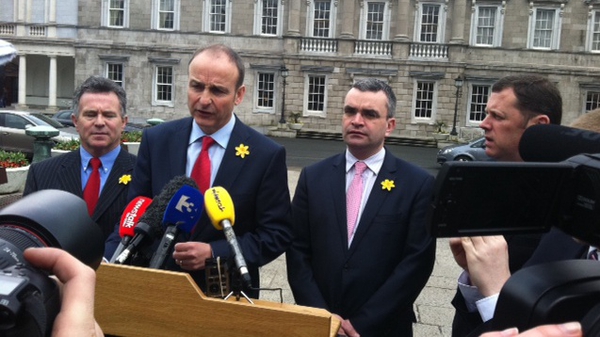